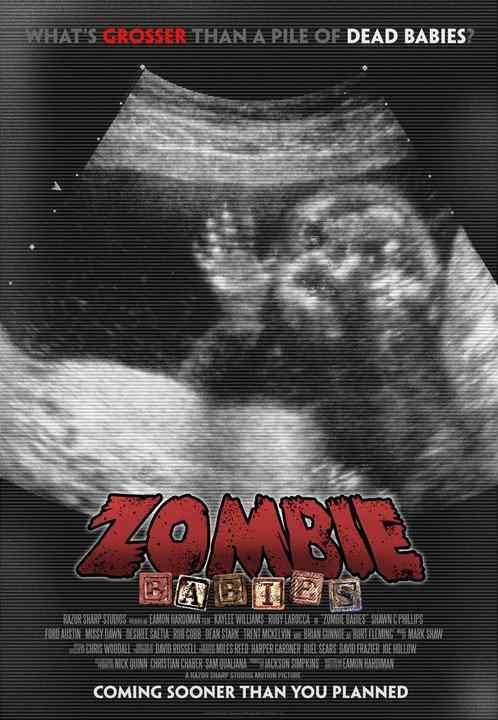 
With a name like Zombie Babies  you will probably know its not something to watch with your grandparents at Christmas time. You should however watch it with friends, beer and a sense of humour!

Zombie Babies  tells the story of a secret, illegal abortion clinic, ran in some creepy big old hotel, aptly hidden by masses of fog. Enter a group of four couples who have come to rid the pregnant ladies of their offspring to be for various reasons. Our crazy yet charismatic aborter himself, Burt Fleming (Brian Gunnoe) is only too happy to oblige for a healthy price and soon after the 'operations' get underway. In the great tradition of all those 80s creature horror flicks where silly mistakes or an ill advised venture into the dark arts cause a total shit storm (Gremlins, Ghoulies etc) the corpses of the newly dead foetuses are duly reanimated. Oooooops.

It's here that Zombie Babies REALLY takes a turn to the poor taste entertainment everyone loves as the killer tykes begin to off their parents in some pretty gnarly ways. The feces and umbilical cord kills being the disgustingly obvious stand outs! It seems that these eight (nearly all) obnoxious people are going to pay a high price for using old Burt for all of their baby needs!

There are some great characters in this film as well as great comedy. Burt Fleming, a character who can also be found in the Porkchop series, is the clear standout. He is one whacked out, highly excitable, maniac and he made me chuckle throughout. Kaylee Williams is natural as ever in her role as the nicer of the group 'Leah' while Missy Dawn was good fun as Leahs polar opposite, the snotty, kinky-sex-loving princess 'Jami Lynn'. I also liked Rob Cobb as Burts befuddled assistant 'Teddy' and Desiree Seatta as the put upon and abused hooker. Poor poor girl- particularly if you hang around for the end credits! The comedy is well written and Eamon Hardiman clearly knows how to create likeable and extremely unloveable characters and use their dialogue to ensure viewers enjoy them nonetheless.

So in short, Razor Sharp Studios continue to cement themselves as top creators of poor taste, funny, gory and inventive indie cinema. Zombie Babies takes a lot of the running theme of sheer wrongness from Porkchop and cranks if up several notches and that should be appreciated. I wasn't overly keen on the great big Zombie monster at the end but, hey, it was still funny to watch what looked like homicidal play dough lumbering around!!

Next up from these sick puppys is the concluding part of the Porkchop trilogy, Porkchop 3D, and I for one can't wait to see what twisted, tongue in cheek horrors await!

You can grab your very own copy of Zombie Babies over here as well as copies of Razor Sharp Studios other films - go do it!!
Posted by Mark B at 10:31