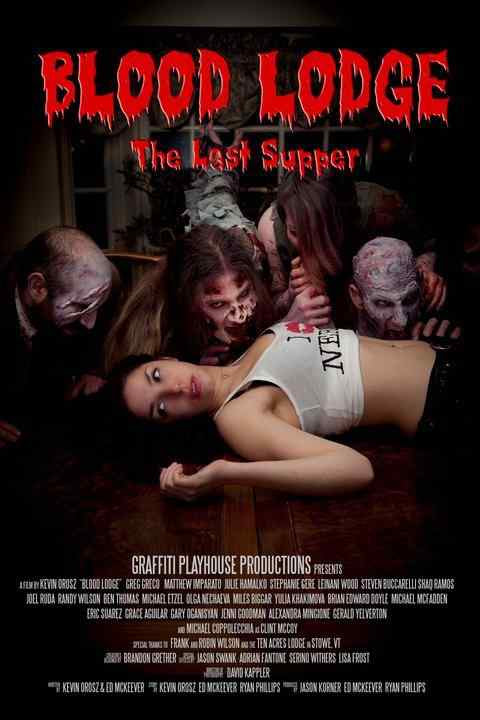 The Ten Acres Lodge becomes hideout for a group of teens and other guests, desperate to survive a nasty zombie attack in Kevin Orosz' Blood Lodge.

Blood lodge is an impressively made little indie horror with a lot of heart (and intestines) and what I liked most about it was its short but action packed running time. A film of this length means that the action needs to kick off immediately and, incidentally, it does. It also features some awesome opening credits!

So in true horror movie style, this unlikely bunch of friends and strangers are stuck and terrified inside the titular lodge as hords of zombies await them. Who will live and who will die? Well lets just say that you may be surprised by the answer to that question because as far as its characters are concerned, Blood Lodge does not pander to expectations which I think is just great.

Gore wise there are some great, gnarly moments. An impressive head stab to violent zombie stands out as the best moment and is indeed, splatterific. I also really appreciated the gruesome zombie makeup effects, very well done I must say!

There is also a lot of decent comedy written into the script with several of the characters making me laugh throughout. There are a few weaker performances but actually a lot of the acting in this film worked really well! Not only that but the soundtrack is fantastic, particularly the end song, I think I would pick a copy of the full soundtrack up if it becomes available.

Check out the films official Facebook page for more information on the film and for details on how you might get to see it! I am keen to see what Kevin Orosz and co come up with next, I want to see more of Ten Acres and its horrors so here is hoping for a sequel!
Posted by Mark B at 11:17