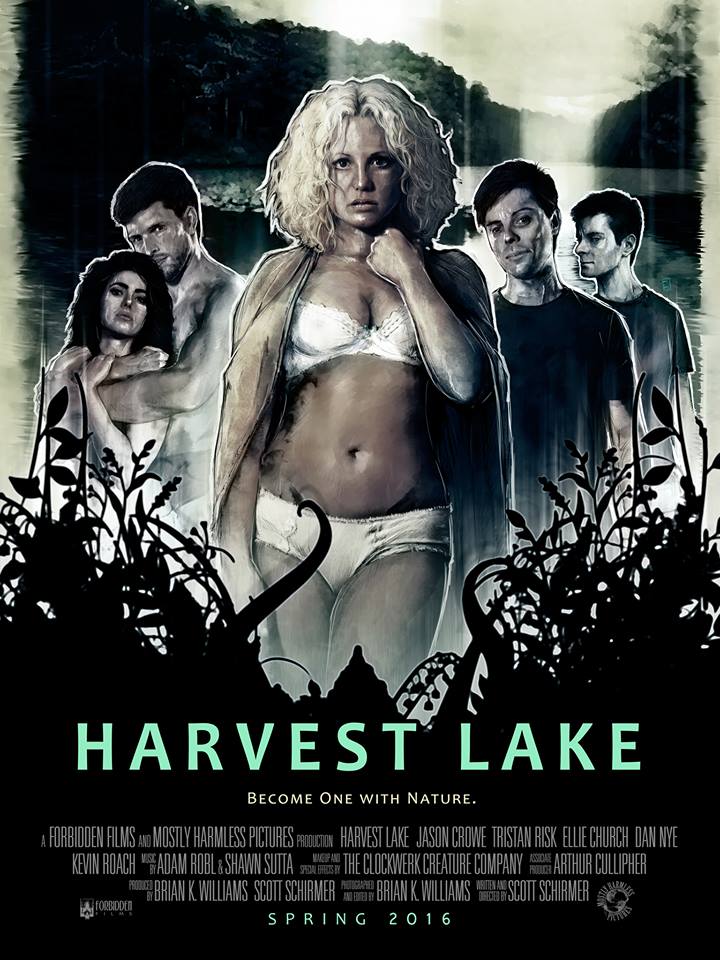 Written and directed by Scott Schirmer


Huge thanks to Scott Schirmer, the mind behind indie shocker Found, for hooking me up with his newest film Harvest Lake. A very different beast to the grim murder/coming of age horror Found, this film is rife with mystery and seductive charm.

Five standout actors make up the main cast and their performances give five interesting, likable and sometimes funny characters. Under the thumb Ben (Dan Nye) cute and sweet natured Jennifer (Ellie Church) sexy and insatiable Cat (Tristan Risk) and unlucky in love nice guy Josh (Jason Crowe) are four friends off on a lakeside getaway where there is literally something in the water. But what is it and what does it want with these fun loving young souls?

An eerie opening scene already previews to audiences that this may not be the best place to hang out but its not until the main group arrive, soon meeting the mysterious Mark (Kevin Roach) that we really start to get a feel of the sexually charged nature of the area.  As the five start to relax, a creeping sense of dread begins to grow and shortly after the introduction of bizarre, phallic plant life adds another expert layer to the film.

As mentioned the performances  are great and the cast really step up to the challenge. American Mary's Tristan Risk gives a sexy, fun edge to Cat, the kind of character who can drop a shocking sentence without a second thought. Dan Nye is just great at comedy I have now realised after seeing him in the Legend of Wasco recently where he played the mischievous Byron, intent on getting his brother law into all manner of trouble. Again Dan plays a funny role but rather than being totally alpha male in Harvest Lake, the comedy stems from him being told what to do by his girlfriend (Cat).  Ahem red swimming briefs...

Elsewhere Jason Crowe (aforementioned brother in law from LoW!) provides the more sensible and intuitive member of the group, Josh, who may have caught the romantic eye of Mark (Volumes of Blood, Bloody Hooker Bang Bang) the handsome stranger who is seemingly being pulled into the same web as the others. Finally Ellie Church, a girl who blew me away in her role of a devious, adulterous wife in And Then YOU Die! plays a nice sympathetic character this time round and comes off as genuinely lovely although being a mysterious thriller this is of course subject to change..

A well written, well acted indie thriller with beautiful cinematography and a gripping, original story. Harvest Lake is one to watch.  In one sense it begs for a sequel, on the other hand the film is just as satisfying left as it is, dark, eerie and intriguing. GRAB A COPY NOW: http://forbiddenfilms.net/harvestlake/
Posted by Mark B at 09:33 1 comment: