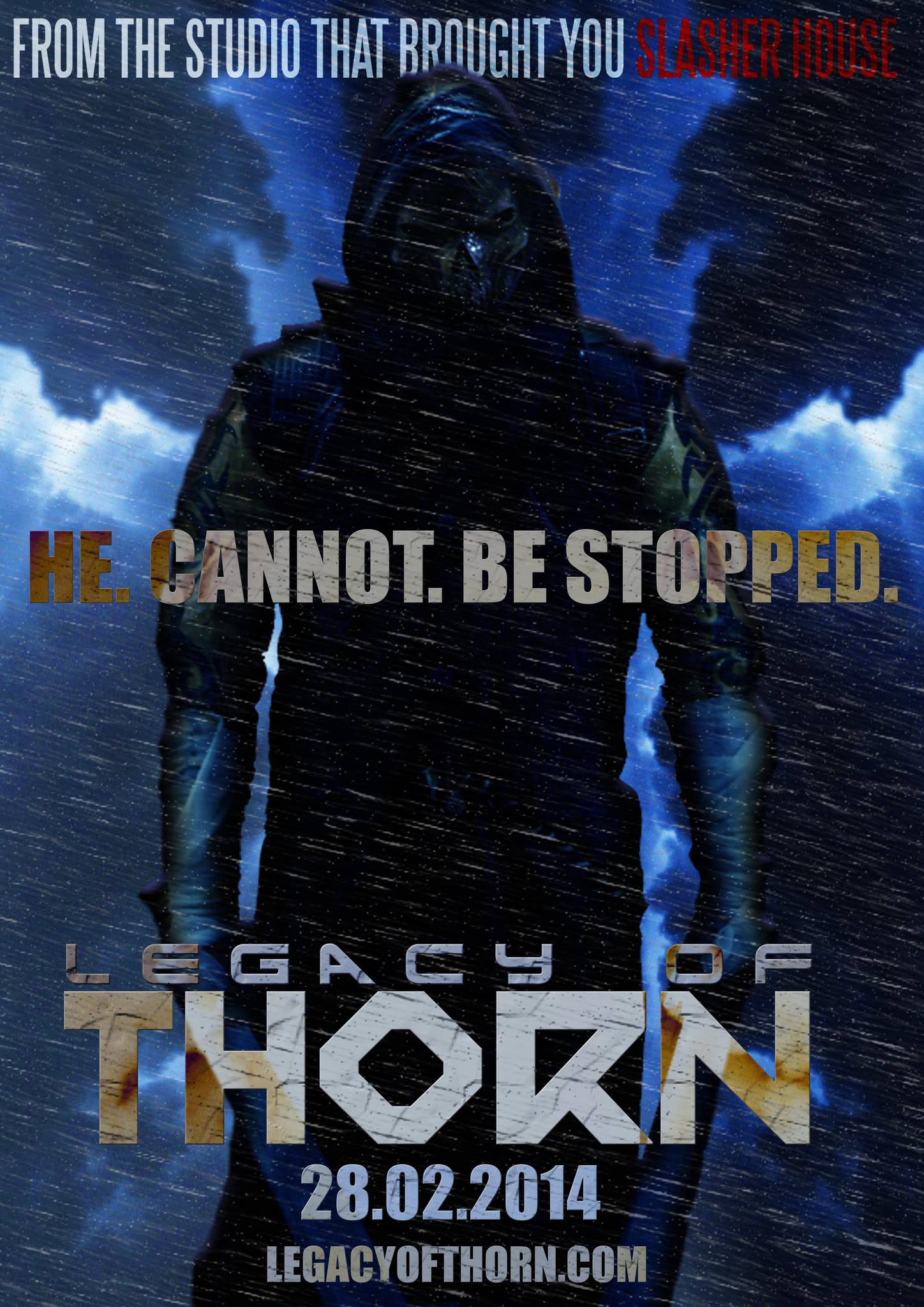 I doubt anyone was more excited than me (challenge me I dare you) when Mycho Entertainment announced a spin off movie from their original Slasher House featuring the colossal sized and colossally crazy manic 'Thorn'. Clad in black, face covered with steel, and wielder of HUGE blades, Thorn chased poor actress Eleanor James around the mysterious Slasher House in an attempt to claim her as his victim. However, there is far more to this mammoth maniacs story then we ever knew and Legacy of Thorn truly lets us into that bloody, twisted world.


The basic premise of LoT is a group of survivors from Thorns previous antics banding together to take him down once and for all, but there is even more to it then that. You need to pay attention to this film as it makes a number of time jumps in order for the audience to witness what has led all of these characters to this dark place (and it gives audiences a chance to see Thorn flex those vicious muscles).

For the majority of this film I felt swept up in what I'm going to call an action horror film as opposed to a slasher film - although there is plenty of slashing throughout mind! I hope that this is not offensive to MJ and co but I felt definite Terminator 2 shades in several parts of the film - a good thing obviously.

Now remind yourselves that this is an independent feature people - money is tight and resources are usually low. That besides there are some incredible scenes in this film that totally belie that fact. Not only are many of the death scenes done with a keen eye and impressive practical effects but there is an under water shot that had me on the edge of my seat. This particular scene was extremely well shot and creepy/depressing as hell and gives me great faith that MJ Dixon and his team may well have the UK horror scene by the nads soon.

Performance wise the group of survivors all do a great job of portraying wounded and angry people, their lives in ruins because of an encounter they never expected or wanted. Jade Wallis as lead 'Jess', Paris Rivers as 'Eric' and Craig Canning as 'Clark' are clear standouts and its easy to see why they where chosen as the core survivors. Special mention to Evie Constanti as school mean girl 'Sally Marsh' who producer Anna McCarthy assures me is a sweetie in real life. This is the kind of intimidating, spiteful girl that would have even had the boys running and hiding at my school! Great albeit scary character.  Not as scary as Thorn however....by a margin....Richard Holloran plays the masked madman with a far more hulkingly creepy presence than many a horror icon. The thought of turning around to seeing that behind me blades and all is enough to make me stop watching horror films (well probably wont go that far but still...)

I completely recommend Legacy of Thorn and please don't be put off by my references to Slasher House you don't have to have seen it to enjoy this in the slightest - although I recommend it. The film has everything, horror, action, emotion and some laughs and to top it off a very intriguing ending that strongly suggests there is even more to explore in the world of Thorn. Thank you to the Mycho team for sharing this with, it was my pleasure to watch.

UK and US viewers can show they support AND get their hands of a fantastic movie by heading HERE and preordering the official Legacy of Thorn DVD. If you like your movies digital then go HERE.  Go get this film folks!
Posted by Mark B at 11:32 1 comment:

A wonderfully arty and creepy post modern slasher film with grin inducing offbeat performances. It's like Ten little Indians went to Twin Peaks to get offed one by one and for that this film gets a high recommendation from me!

A creepy opening scene involving a nice old fashioned horror movie chase complete with masked psycho and beautiful lady, leads the film moves towards it core plot. Ten woman arrive at the mansion where the aforementioned chase took place but in an intriguing twist  it transpires that these are all apparent strangers with no ties to one another.

As the women find themselves stranded for the night, a masked maniac begins taking them out one by one.... you have all heard THAT one before I know, however Ten has a refreshingly different tone to your usual slice and dice fare. There is a dreamlike quality to proceedings that may take the seasoned slasher fan out of their comfort zone but will certainly appeal to those looking for something a bit different and original. There are some funny scenes for sure - ten very different people all holed up together? Of course you should expect some fighting and squabbling! You may not, however, expect a musical number but that's what you get and it should raise a smile.

Please show your support for TEN and go and check out the official movie website.  I am excited to see what is next in store from this team that's for sure.