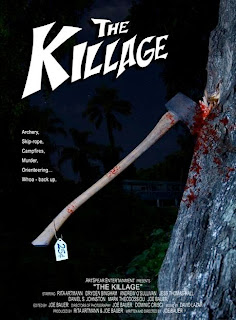 Artspear Entertainment provide us lucky slasher movie fans with one of the best indie horror comedies you will likely see in recent years!

I'm really not sure where to start with this review. In short, The Killage absolutely fucking rocked. It has everything a good old fashioned slasher movie has to offer: creative deaths, stereotypical characters, absurd scenarios - and sends them up to the hilt. And I mean the hilt.

So the story: 11 people head off to a summer camp for a team building type of weekend for their company. But there's a difference: the employees are competing for the title of 'Team Leader' and will be put through their paces in order to ascertain the right guy or gal for the job. Unfortunately for our dysfunctional rag-tag band of misfits, somebody among them has a literal axe to grind. Starting out with a ominous campfire death threat (where else?) and accelerating to a series of grisly (yet hilarious) murders, The Killage shocks and amuses in equal measure. Remaining survivors must band together, putting aside their petty differences (or not) in order to unmask the murderer. 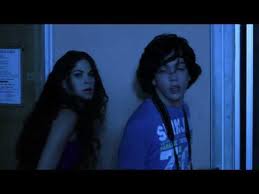 I have to start by saying the characters are superb in this movie. Stuck up super bitch 'Hannah', hopeless bimbo 'Krystal', vicious cripple 'Dickman' (aptly named) loveable loser 'Gus' (played brilliantly by writer/director Joe Bauer!) miserable goth 'Madison', Super hot 'Emily', "secret" pot head 'Andre' , dorky 'Warren', sweet but slightly angry 'Lucy', swishy fairy 'Dimitri' cringe worthy camp instructor 'Patrick' and the usually naked (!) 'Jock'. All characters are hilarious stereotype send ups and I defy anyone not to find at least one of these characters to be a total riot. The acting itself was fun, and I'm pretty sure intentionally cheesy based on everything else going on in the movie. Carmel Savage (Hannah) stomped about in her killer stilettos with the perfect amount of attitude and played the 'camp bitch' you just wanna see die, with gusto. Also Rita Artmann was extremely natural and engaging as the lusted after heroine Emily as was Joe Bauer as the love lorn Gus. 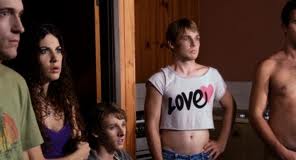 I wouldn’t be doing this review justice if I didn’t commend the writing. The film is rife with witty one liners, intentionally offensive jokes and comedic scenes. I was literally laughing out loud at the bullying campaign wrought upon poor Warren at the hands of wheelchair bound brat from hell Dickman.

The Killage is also incredibly well made, definitely a cut above (sorry!) many indie horror films in both it's direction and presentation. The kill scenes in particular are shot brilliantly and the effects are awesome. While I'm on the kills did I mention they were creative? There are some crazy kills in this film, a number of which you probably haven’t seen before in a horror flick - ahem dental floss.... 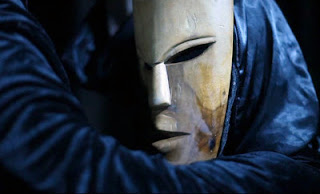 HIGHLY HIGHLY recommended, grab a copy of The Killage or catch a screening if you can, it's a truly entertaining, hilarious and gory good time - you will NOT regret it. P.S STICK AROUND FOR THE END CREDITS....EVEN IF IT'S JUST TO CATCH A BIT MORE NUDITY ;)