Many thanks to director Corey Norman for asking me to check out his new horror short Suffer the Little Children which is based on the short story by Stephen King (available as part of the Nightmares and Dreamscapes anthology).

This is a short that will stick with you for some time (if you have a soul) and I have to confess that while I found it brilliantly realised by Corey and Haley Norman, there were moments I wanted to look away!

This is a difficult one to review in the sense I don't want to give anything away for those who are unfamiliar with the short story and so I will leave it at a brief summary.  Anne Bobby who starred in the fantastic Nightbreed from the macabre Clive Barker plays a stressed school teacher who suspects something is horribly wrong with the children in her class. After a horrifying encounter with one of her pupils - a brilliantly eerie performance by Andrew Lyndaker - Anne's character Miss Sidley ends up on sick leave. When she returns however she has a dark plan to end the evils she is certain have taken hold of the school.

What happens next is jaw dropping - the climax of this short is horrible yes but also extremely well executed and acted. The main question that soon remains is what is really going on at this school?

There is a nice streak of ambiguity in Suffer the Little Children but do not let that put you off - I think it only adds to an effective film which really makes you think and reassess what you have just watched. Hats off to the Normans for an excellent and unsettling horror short which deserves to be seen by a wider audience.

A few years back in 2012 I was lucky to get the chance to preview offbeat slasher movie Community Service (Review) and now I have had the opportunity to check out its insane sequel Bloody Island.

With a nice fast and frenzied recap of the original movie, Bloody Island  kicks off and one thing that struck me immediately was a vast improvement in the cinematography from the first film. I'm not sure if the budget for the film is any higher than Community Service  but it sure looks like it.

Another thing is continuity - I really like how various family members etc of the victims of Community Service  share their views on the bloodbath that killer Billy caused the first time around. It doesn't feel like exposition overkill in the slightest just a decent and creative way of bridging the gap between the movies and ensures audiences are confident that events from the original haven't been discarded in order to 'change things up' for the sequel.

So what horrors are in store in  Bloody Island?  Bob Butterfield is back following previous events and carries a lot of guilt for his part in Billy's childhood psychosis (which became ten times worse as an adult!).  Bob is a good guy but he makes some monumentally insane decisions - no less this time around when he agrees to escort another bunch of juvenile delinquents to a secluded island in order to supervise their punishment. Still, no bad decision = no horror movie so stay with it! This time around the island is home to an abandoned theme park (bar a few wonderfully odd carnies who have remained behind|) which really adds to the creepy atmosphere.

Killer Billy is still after Bob with an absolute vengeance...I recall having a slight moan about a mother/child scene in Community Service and another similar scene occurs in the opening act to this movie. In hindsight, this does reflect how detestable a man Billy is and its clear that all he honestly cares about is ending the life of the man he blames for all of his problems - no one is safe!

And this horrible scene is just the start of a sickening killing spree which will make you choke on your popcorn. Characters are spared no pain and I wont go into any spoilers on this but just be sure to keep your eyes open for some cruel theme park based executions.. Props to Joseph for not softening the blow and giving Bloody Island a real streak of the nasty!

I very much recommend Bloody Island and to grab a copy when its made available to the unsuspecting public. Its brutal and nasty but a hell of a lot of fun and follows on perfectly from the original film. Read more about it over here on Facebook! 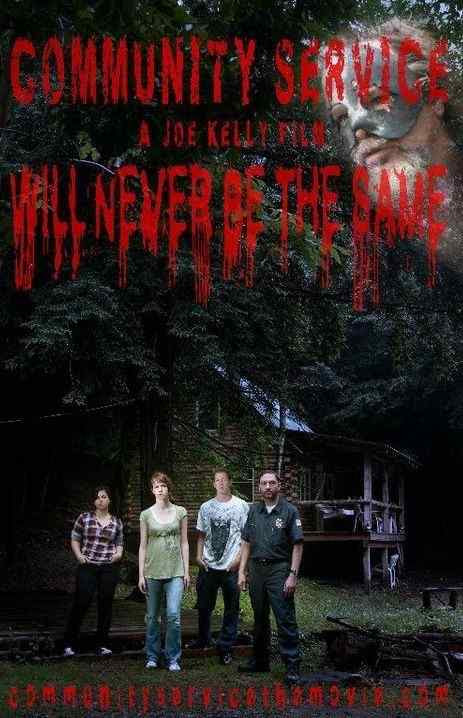 Big thank you to film maker Joe Kelly for being kind enough to share his indie slasher flick Community Service with me! I am loving the recent spate (Raymond Did It anyone?) of indie horrors which appear to pay direct homage to some of the more obscure revenge slashers of the 80s such as Offerings and for me, Community Service does a great job in achieving this.

The plot of the film kicks off in the past where a young lonely boy, Billy, is accosted by a pair of mean kids who have been making his life a misery at school. The young lads go a step too far when they attempt to destroy something very close to Billy's heart causing him to snap and lose his temper. In a fit of rage Billy attacks and kills one of the bullies much to the horror of a number of onlookers.

20 years later Billy is in the nut house and not showing any sign of improvement on his anger issues, meanwhile the surviving bully, Bob, has become a local police officer. 'Officer Bob' has the thankless task of running a community service programme at a nearby camp ground which very unfortunately is situated close to the psychiatric ward that has become Billy's home.

Being a slasher flick, it goes without saying that Officer Bob and his young charges, all on the programme for various petty crimes, are in big trouble. Billy has made his escape following learning of Bobs position and whereabouts and he wants to finish what he started 20 years ago...no matter who else he has to kill along the way.

I really enjoyed this short but sweet slasher. It has all your required ingredients to make a successful body count movie: incident from the past rearing its ugly head, psychotic child growing up to be an even more psychotic adult, a motely group of teenagers with differing personalities and traits, and a number of good kills. My only real complaint about the movie was a scene involving a mother and child which I just found to be a bit unnecessary.

I also think the film turned out some fine performances. Most of the teens did a good job particularly Iliana Garcia and Caitlyn Kenyon and I also enjoyed Christopher Woods portrayal of Officer Bob.

I think Joe Kelly hit the nail on the head with Community Service its obvious he knows he slasher fare and used his knowledge to create a fun, well paced, often funny, at many times gory, horror film. I am extremely interested to know what Joe might be working on next and I will also be first in line to check it out. Head on over to the official Community Service: The Movie website to find out more about the film and show your support by grabbing a copy as soon as its released!