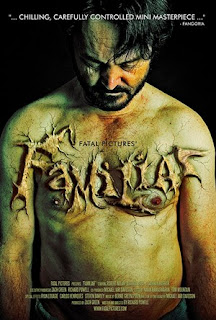 Jon, a married man with a teenage daughter  goes about his day to day life while buried beneath his facade is a plethora of angry and horrifying thoughts directed at his oblivious family. Why is this happening...is Jon mad, evil....or something else? Bringing back the excellent Robert Nolan to play lead character 'Jon Dodd' (note that the scary character he played in Worm was named 'Geoffrey Dodd') was a wise move. Yet again he superbly plays a quiet and unassuming  man with something very very bad lurking under the surface and he is just a real talent to watch.

The short film packs quite the punch in its 24 minute running time. It is excellently scripted with Jon's vicious thoughts drawing you in and than dragging you along, albeit willingly, to the squirm inducing, eye opening finish. I couldn't give away where this short film ends up going but I will say you will be shocked, disgusted and amazed in equal measure. The climax of the film is the polar opposite of the low key, yet thought provoking ending of Worm and body horror fans are going to LOVE it.

You should also note that this is an idependent production so the fact that it is shot so inrcedibly professionally makes it further stand out from the crowd. There is no chopy editing, headache worthy cutaway scenes and the dialogue is delivered with crystal clear audio.

Please check out this exclusive clip from the movie and for the chance to see it  VERY soon it is screening  at Texas Frightmare Weekend. May 4,5 and 6! 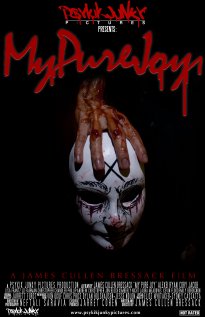 From first time Director James Cullen Bressack comes a sadistic little indie slasher which has the occasional tendency to catapult over boundaries. Telling the tale of stoner teen Adam, My Pure Joy drags viewers into the world of a mind so rotted by years of horror movie fandom that things are bound to get a little....messy.

I really enjoyed the opening to this movie- it was really bloody creepy. If you ever had irrational fears as a child of a scary face appearing from the darkness of your wardrobe (or in this case door frame) then My Pure Joy will serve as an eerie reminder! That whole sequence really worked for me - an insanely unsettling porcelain mask slowly appearing round the door frame of a young child trying to sleep. Then comes the really messed up stuff! Wiping out an entire family in graphic and fairly creative fashion our masked killer heads home, revealing himself to be aforementioned Adam. Unfortunately Adam hasn't gotten killing out of his system and other lives are in danger.

As the film progresses we are shown a very unhappy existence for our anti hero. He is mourning the loss of his father, fighting with his mother and angry that his older brother has returned to the family home. This, in addition to a lifetime diet of horror movies appears to be the catalyst for Adams mind to deteriorate enough to drive him to kill. Soon others fall foul of Adams rage after a humiliating scene at a pool party and if these scenes don't make you balk in horror then there is something horribly wrong. I wont go into spoiler territory here but there is some incredibly difficult viewing to be had here particularly involving the young female victim.

Acting wise I think massive props have to go to Alexei Ryan. A very impressive actor who manages to evoke sympathy and disgust in equal measure. Scenes where he is playing with his food with a sharp knife really ratchet up the tension and you can never help but wonder what he might do next when he has an implement of some variety on his person!

As a criticism I would say there is a bit too much talking going on. It isn't a film in need of a high body count, in fact if it did I think it would lose it's effect, but there are too many drawn out scenes where Adam is talking with his friends or arguing with his mother. I think the more bloody thirsty horror fans out there will be a bit put off by the length of the film against the carnage count - but then at least you get to know the main characters enough for the finale to stick in your mind. It is a nasty little finale after all.

I think My Pure Joy is an impressive first film. It has an interesting lead character, a brilliantly eerie mask, some deranged forms of murder/torture and a far more intellect than the average slasher movie. Considering what James did with the killers costume in the movie and the unsettling way in which he creeps around, I cannot wait to see his upcoming short film 'Unmimely Demise' ( part of Theatre of the Deranged 2!) Pick up the DVD now from all good USA stores - it's a good watch and highlights a new name in indie horror to keep your eye on.