Saturday Morning Massacre is a film I have been eager to check out for some time so I was most grateful when Writer and Producer Jason Wehling offered me an online screener to review.

Featuring a group of self made ghost hunters, Nancy, Chad, Floyd and Gwen and their dog (Scooby Doo fans paying attention?) who are fed up with cracking cases of reported hauntings and getting no financial reward for it. So when a paid gig over at the old, deserted Kyser School House presents itself, the team hot foot it over there like a bunch of gazelles.

Meeting local police Officer Lance on location, the team refuse to listen to his warnings about spending the night in the Schoolhouse and even creepily placed signs of devil worship are not enough to deter them. As is always the way with a movie with 'massacre' in the tile, things begin to go horribly awry very quickly. That being said, if you are thinking 'oh just another slasher movie then' DONT let my previous comment put you off. The movie has a lot more going for it then that; its comedy is spot on, there is a continued mystery as to what is actually going on in the house and how it relates to the tales of the past and you are kept on the edge of your seat until the very end. Not to mention a perfect final scene.

The film is also very well made, it comes across as very polished and professional and the lighting is impressive throughout considering the team are holed up in such a dark old house. To add to that there are several really cool and offbeat shots throughout the film which helps to give the film the slightly odd edge that it most definitely has.

Further to this 'odd edge'; the group of ghost hunters have a very strange, almost surreal way of interacting with each other, particularly as a whole group. I can't explain if any better than that but trust you will see what I mean when you see it. Some of the more touching moments reminded me of the love scenes in Twin Peaks, from the backing music to the overall acting. I enjoyed this element a lot.

As far as acting goes I enjoyed all of the main performances and you can easily see why Ashley Rae Spillers was chosen to play the quirky lead 'Nancy', she does a great job as a kind hearted yet tough young woman.

Saturday Morning Massacre is one to check out when you get the chance. It has gore, scares and laughs and shows great promise for the people behind it. Check it out on Facebook to find out more!
Posted by Mark B at 12:08 No comments: 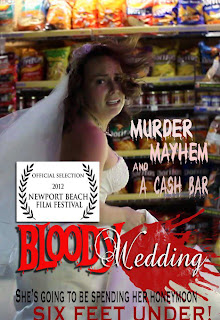 MASSIVE thanks to Patty Sharkey, Co Writer of Bloody Wedding for sending me a screener copy for review. This type of movie is SO much my kind of thing I cant tell you enough and I am so pleased to report that it did not disappoint.

The plot is a simple as you like; a group of family members convene for a wedding only to start to fall foul of a mental case out for blood. What makes Bloody Wedding so fun and entertaining is its mixture of characters such as the mean step mother, super bitch half sister from hell, drunk father and so on. Its almost like an episode of Dynasty with a great big meat cleaver through it.

So anyway; Pierce (Ryan Sulak) and Cindy (Kate Murdoch) are tying the knot and they head off to a beautiful lakeside mountain resort in order to make their vows. With this comes the introduction of Pierce to Cindy's interesting mix of family members. You have the aforementioned drunk father (AJ Martin) unsympathetic and cold step mother (Sandy Rhineberger) and flame haired, viper half sister (Pason) on top of this there are various other characters such as Cindy's kind brother (Brad Coffey), Pierces rude as hell (seriously) best friend (Jordan Bates) and brother (Mike Pfaff). Here we have quite the colourful menu for our mysterious killer to pick from and its not long before guests start dropping like flies. Its up to Cindy to find out who is turning her special day into a total blood bath before her and Pierce end up honeymooning beyond the grave!

As mentioned (as well as some great gore and a couple of original death scenes) this film is all about the well written and well performed characters. I am pretty sure there were none that I DIDDNT enjoy which is amazing. My favourites include Pason as the nasty half sister Tiffany, a fantastically bitchy performance, Jordan Bates as Jim, quite possibly the crudest person I have ever heard on screen,  and Marguerite Insolia as the feisty Kitty. Both leads Ryan Sulak and Kate Murdoch are also very impressive as the loved up couple thrown into their worst nightmare!

I am very much going to be keeping my eye out on any future work from 'Sharkey Films' as this team sure know how to make something relentlessly entertaining. Get on over HERE to find out more about this hilarious, bloody and very fun slasher flick!
Posted by Mark B at 08:23 No comments: