I was thrilled to be contacted by Deadbolt films, the guys behind one of my favorite independent slasher films (and its British to boot) The Shadow of Death. This time around Gav Chuckie Steel and Paul Dixon Barker are gearing up to release new film Preternatural.

To be honest I think its best that the mystery of this film is contained - you need to see it for yourself so just take the short synopsis: Two amateur film-makers find the movie they thought they were making, is actually making them and run with it.

Gav actually stars in the  film, playing one of the two filmmakers along with Dixon Barker who...can you guess?....wrote this film. I really liked the way this film plays with reality and fantasy and a key element of suspense throughout is having no clue which way it will twist next.

Both Gav and Dixon do a great job playing the bickering filmmakers (they may of course not be acting but that's their business) as they struggle to get their work done on a low budget. Its when their recently cast actor turns up that things start making a more insidious decline. Mark Williams as 'Mark' does a superb job of playing the creepy and mysterious actor who Gav and Dixon will wish they had never met!

Things continue to get stranger and I think that is genuinely the real appeal of Preternatural - you probably haven't seen anything quite like it and that can only be a plus point.

Viewers who like a simple narrative and all questions answered may find themselves disappointed so do take this as a warning. However if you appreciate something a bit more mind bending and unwilling to conform to genre devices then this is your movie. 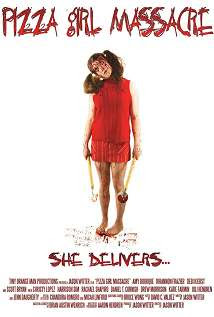 Written and directed by Jason Witter

In the summer of 2013, a community theatre group from Albuquerque, NM decided to stage a production of William Shakespeare's "A Midsummer Night's Dream." Since the majority of the play takes place in an enchanted forest, the troupe thought it would be a good idea to rehearse in the woods. So they rented a cabin... In the woods... They never returned.

I was happy to talk to Jason Witter, the man behind this very different kind of found footage flick and obtain a copy for review. I am pleased to say it strikes a good balance between horror and comedy and comes across as downright dark and creepy in certain places.

Obviously renting a cabin in the woods is a terrible terrible idea and shooting a movie at the same time just means that when you are 'never seen or heard from again' people like me will have to watch to see what might have happened to you. I enjoy found footage horror, although some can truly test the patience of a saint, and this one was fresh and inventive as well as kind of nuts.

The rag tag group of theater actors, actresses and crew seem a bit spooked when they first meet the offbeat mother and son owner of their rented cabin. To be honest Mama Debi's initial appearance     dragged me kicking and screaming back to the one truly scary part of Sleepaway Camp...Aunt Martha.

Of course this odd little interaction isn't going to throw a spanner in their works and so rather than run screaming for the hills they commence work. But there is more to this family unit then they realise and soon they will meet the dreaded daughter  (played by Amy Borque) who is only too happy to be star of the show...with the theater group her unwilling prey.

The film plays out like a found footage slasher movie with shades of Texas Chainsaw Massacre and it does a great job of keeping you interested. You are not waiting for a final scene of true horror before the film abruptly ends which is refreshing to see and it also boats some insanely batshit performances (particularly Debi Kierst and Amy Borque). As previously mentioned there are moments of comedy throughout but some scenes are also downright disturbing - throw in some grisly murders and the outcome is actually a pretty well balanced film.

Looking forward to more work from Jason in the near future!
Posted by Mark B at 01:29 No comments: