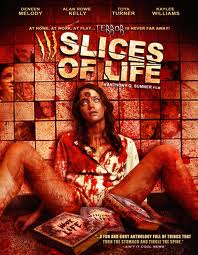 
For those fans out there who are really appreciating the new surge of Tales From the Crypt style anthology flicks such as ‘Drive-in Horror Show’ writer and director Anthony G. Sumner has really come up with the goods for you with his new film ‘Slices of Life’. The movie has quite rightfully been receiving a lot of buzz and high praise over the past year or so and received its anticipated DVD release June 7 this year. 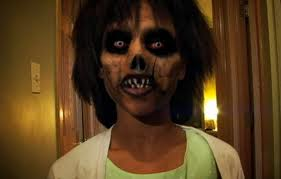 The movie consists of three stories (Work Life, Home Life, Sex Life) with a genuinely intriguing wrap around story, featuring a sweet and vulnerable performance by rising scream queen Kaylee Williams. Considering its extremely low budget this movie far exceeds expectations – It’s well made, well written and features a number of strong performances, particularly from its female actors.
Opening tale ‘W.O.R.M,’ (Work Life) is an hilarious story of a nano virus gone horribly wrong, resulting in a blood bath of body horror and out and out gore. It’s basically a zombie tale with a techno twist and very enjoyable to boot. It may also be worth pointing out that the always superb Alan Rowe Kelly provides a freakishly entertaining cameo here as a sexy web cam vamp – fans will certainly be thrilled. Admittedly W.O.R.M is the least enjoyable of the three shorts but isn’t to take away from its entertainment value. 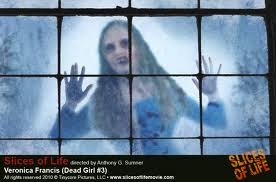 Second up ‘Amber Alert’ (Home Life) is a dark tale involving child kidnap, demonic haunting and a disturbing resolution which rears its head at the end in gory fashion (*Ahem * Sledgehammer scene!) Toya Turner as the pregnant-lead-in-peril, shines here as her character ‘Vonda’ really raising the bar for acting within independent horror. I wouldn’t want to give away the ending of this short so to conclude it’s a great little movie and extremely engrossing along with it.
Finally you get the craziest segment of the bunch ‘Pink Snapper’. This gory little short involves a brother and sister on the run, a house masking a gruesome secret and all kinds of the red stuff.  Another scream queen in the making, Deneen Melody, plays the damaged female character ‘Susan’ to perfection in this tale. After supposedly killing her abusive Uncle, Susan’s brother Eric (Galen Shloeming) takes her on the run where they stumble upon a far more dangerous horror.  I wouldn’t want to give too much away regarding the climax of Pink Snapper except to say you may find yourself crossing your legs VERY tightly! This segment really ends the anthology part of the movie on a blood splattered high. 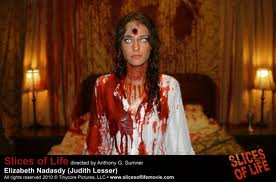 The wrap around segment serves to tie things up in an original and interesting manner but again it should be seen first hand. Slices of Life is one of those indie flicks that needs to be seen and appreciated as it really does bring the horror goods. The film seems to be quickly finding its audience which is just fantastic to see – purchasing a copy comes highly recommended.
Posted by Mark B at 06:33 No comments: 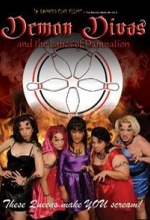 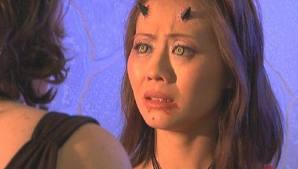 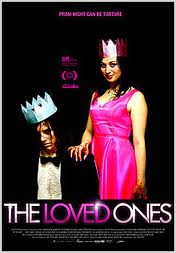 Australian Director Sean Byrne gives the horror genre a most welcome -and painfully nasty - boost with this shining example of a true piece of cinematic terror.
Drawing on a much maligned subgenre such as 'torture porn' may be ill advised if you can't find a way to draw new blood from it and do something different – and here is where Sean Byrne delivers admirably.
Opening with a fast and brutal car smash we are soon dropped in the middle of the depressed and bleak world of Brent (Xavier Samuel) - a teenager who lost his father in aforementioned accident where he was behind the wheel. Carrying a wealth of grief and guilt and dealing with his mother’s subsequent alcoholism, the only happiness Brent seems to have to save him from a dark descent into complete mental breakdown, is his sweet and loving girlfriend Holly (Victoria Thaine).
Still, this is a horror movie so you can very much expect the shit to hit the fan at any time and this comes in the form of school misfit Lola Stone (played with incredible and terrifying talent by Robin McLeavy). When Lola first asks Brent to accompany her to the end of school dance with her meek whine of a voice you would be forgiven some surprise to discover the true twisted monster which lurks beneath her shy facade.
Not allowing a little polite rejection to stand in her way, Lola has her 'Daddy' (a very scary John Brumpton) kidnap Brent and bring him home to their very own end of school dance. Not wishing to give too much else away as there are plenty of surprises to be had in Lola's house of horrors, it is safe to say that this prom will not be a pleasant experience for Brent. Rather than vodka laced punch, dancing the night away and some 'fun' in the back seat of a car, Brent instead gets up close and personal with knives, syringes, hammers, powers drills...and in keeping with the prom theme - a mirrored disco ball!
In what appears to be an attempt to alleviate the stress of Brent’s ordeal we are also shown a side story in which Brent’s best friend Sac takes the girl of his dreams, sexy goth Mia, to the dance. Here these characters manage to get up to all the things Brent could only wish that he was doing. While most of this side story appears very much irrelevant it does tie in rather well at the end, where we find out further details of Lola and family’s hideous endeavours - let’s just say that things are more powerful and far reaching than they appear to be in the first half of the film. In  fact my sound advice to anyone who intends to see this flick is AVOID THE OFFICIAL TRAILER LIKE THE PLAGUE! Way too much given away here and will certainly detract from the viewing experience.
Performances are solid all round in ‘The Loved Ones’ with everybody doing a great job with their roles, most of which aside from ‘Sac’ require some grit. Most impressive however are the well chosen leads. Xavier Samuel seems to effortlessly portray a damaged teenager finding it difficult to cope in the wake of tragedy. He also shows great promise when baring his teeth and fighting for his life after accepting it’s kill or be killed. Robin McLeavy gives the performance of her life in a role that will get her noticed even if people start crossing the street to avoid her. Her spoiled, sexual, childish and violently insane ‘Lola’ tramples all over Kathy Bates’ ‘Annie Wilkes‘ with bloody spiked stilettos  – and further more she seems to be having a blast doing so. The girl deserves more roles – pronto.
I highly recommend going into The Loved Ones as blind as possible to ensure you experience all of the twists and turns as they are intended to be. This film is one blood splattered date you do not want to miss or be late for.  Also -If you are thinking of taking a weirdo to your school dance do yourself a favour and stick with Carrie White!!
Posted by Mark B at 03:58 No comments: