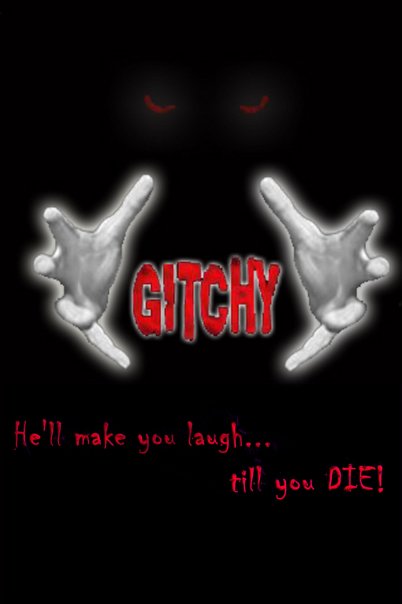 
Many thanks to the dudes behind creepy clown horror, Gitchy, for hooking me up with an online screener.

Gitchy took me by complete suprise by being an exceptionally well acted, suspenseful, intriguing and slightly campy mix of terror and chuckles (literally)

The film tells the story of David and Kimberley, siblings whose parents died from heart attacks at precisely the same time. This creepy and baffling plot device really hooked me into the film I have to tell you! Following this, David has undergone an apparent mental breakdown, experiencing horrible dreams and drawing pictures of a frightening looking clown. Sadly for this pair and those around them, Gitchy the tickling clown is not just the stuff of nightmares - and he's coming for them...

Solid performances from all involved really take this horror short to another level. Both Michael J.Brown and Steffany Cano are superb as the tormented brother and sister and I also felt that Mary Kate Gallagher gave an extremely believeable perfomance as best friend Becky. Add to that Lazer Rays eerie performance as Christopher, a guy who looks and acts uncannily like killer Bob from Twin Peaks!!

There are also some genuinely disturbing scenes in Gitchy which is suprising considering that the film involves a clown whose murder techinque doesnt stretch beyond ticking! But trust me, some of the scenes involving Gitchy are truly horrible and really made me sit up and pay attention to the film. From someone who used to be beyond terrified of clowns as a kid, this movie would do nobody with coulrophobia any favours!

I am very excited to see what Thomas Norman and the rest of the Gitchy team might come up next, maybe Gitchy will make it into a feature film. Either way, this short chiller shows undeniable promise and I cannot wait to see more!