Loveable sicko Ryan Nicholson continues Plotdigger Films blood (and other bodily fluid) smeared reputation with new film Famine. Being a fan of 2008s gory slasher epic, Gutterballs, I was pleased to learn that Ryan and co has returned to the slasher arena complete with a killer sporting a unique costume. While I loved Gutterballs, particularly the killers bowling bag mask and it's inventive kills, I did struggle with the lengthy rape scene. I am sure I am not alone in that respect but it is still a great watch and I am lucky enough to have a copy from the first run of DVDs. I also had a great time watching Bleading Lady (aka Star Vehicle) although I first saw it in a horribly butchered cut version before seeing it in all it's gory glory. I have yet to pick up Hanger but after seeing this gloriously twisted little slash fest its definitely next on my list! So plot wise what do we have? A group of largely immoralistic teens are holed up in their school for a twenty four hour famine. Sadly the school is also the setting for a nasty accident occurring 5 years before which culminated in a teacher having his skin gruesomely stripped away. Obviously this very fact means our group of misfits are screwed and very soon a maniac clad in the creepy, albeit quite cute, school mascot uniform starts offing them left right and centre. This is cue for some of the more nastily inventive kills you could hope to see in a slasher movie and this is a huge compliment to Plotdigger films who have already cemented themselves as champions of creatively staged murders in previous films.

The characters in this film are top notch. Yeh sure a few of the performances are a tad ropey but they are still so much fun so you can easily ignore this. From the group of mean 'cheer-bitches', Sarah, Katie, Andrea and Vanessa, to the comically creepy Cathy, not to mention the inappropriately seductive Ms Vickers and the token perve Janitor, there is no end to the motley collection of potential victims and suspects. 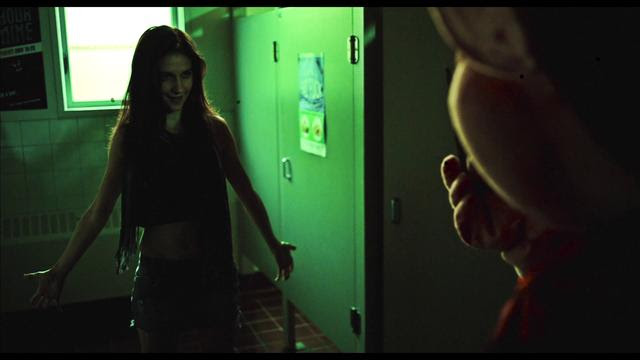 The film also looks extremely fresh and well presented. I was expecting more of a grind house feel based on the trailer, not that I would have had a problem with that, but Famine definitely stands as Plotdiggers most aesthetically pleasing films out of the three I have seen thus far.

Check out Plotdigger Films official website and also snag a copy of the Famine DVD (complete with English audio) from Amazon Germany on the 28 September!
Posted by Mark B at 11:18