I have been meaning to catch Matt Walkers intriguing looking little indie horror for a while and finally got the chance to do so today. I'm really glad I did because Scarlet Rain really packs in a tight, well performed and inventive film into its short running time.

The first thing that really struck me after its initial atmospheric opening was just how well shot the film is. It looks so professional and not at all low budget in the slightest. I enjoyed the credit sequence which takes you on a journey through the small town where the action will soon unfold.

Scarlet Rain concerns twin college students Dotty (Sarah Synder) and Ted (Jonathan Shea) who fend for themselves following the death of their parents. An announcement of a local double murder doesn't prevent the pair attending a party hosted by Dotty’s popular friend Alison and it is here that Dotty spins a gruesome yarn from the town’s history. It seems a powerful witch was betrayed by the townsfolk and decided to wreck a murderous revenge on them. Turning her victim’s blood to rain, the story goes that anyone touched by the deadly drops is marked for death. Although the witch was eventually killed, she died with twins inside her (Evil and Darkness) and a recent bloody rainstorm in town suggests that the twins may have returned to continue their mother’s horrific revenge. 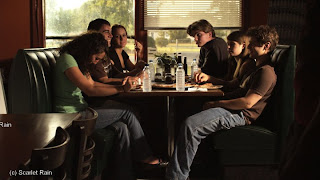 Friends from the party meet up another night for food and drinks and after leaving (mid rain storm) find themselves caught up in a nightmare of murder and terror once the rain turns a bright and unsettling red. The real horror begins with a confrontation in the woods which unfortunately comes off a little bit hokey - once this is out if the way though the chase is on and the remaining teens are literally running for their lives from an unstoppable force. 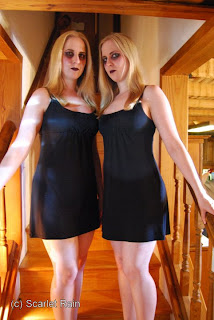 Acting wise I really enjoyed Jonathan Sheas performance as Ted and Alex Pepper was great as the scaredy cat but ultimately heroic 'Pete'. I must also mention that the twins themselves are formidable looking and often downright creepy. I would love to see them back in a sequel as they are definitely two cool new horror villains. There are also some really effective murder sequences in Scarlet Rain, in particular the high heel kill and the rooftop stabbing.

Is Scarlet Rain a perfect film? No - it has its flaws here and these are mainly down to a couple of weaker performances. However it is a well made, gruesome and fun horror flick that I would definitely watch again. The people behind the film are working on a DVD release so stayed tuned to their Facebook page for more details...until then you can stream the movie from Indie Flix for a bargain price like I did.
Posted by Mark B at 09:03