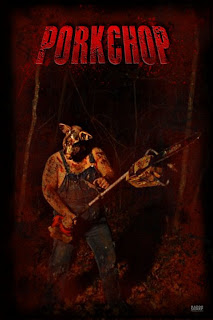 Whenever I hear upcoming movie quotes such as ‘done in the style of Sleepaway Camp’ etc etc I’m usually already sold. That’s why I absolutely had to get on board with writer/director Eamon Hardimans Kickstarter project for his 2010, self released film Porkchop. For some reason I had let the initial fundraiser completely slip beneath my radar and I was late to the party with the second fundraiser which allowed you to contribute to making the first run of DVDs (of which you got your own copy). Better late than never though, I got a donation in and sometime there after a shiny copy of Porkchop, complete with imaginative 80s style artwork winged its way to my mailbox in the UK.

So the usual slasher premise: a group of party hearty teenagers in the 1980s load up a camper van and head off to an abandoned summer camp for a good time. Obviously they are in the wrong abandoned summer camp anddon’t realise that a psychopath wearing a great big pig mask is just waiting to taking them out one by one. A first plus point then would be that the film has a very authentic 80s look. Clothing, locations, vehicles, food stores – everything has that 80s look and its clearthere was a lot of attention to detail here.

Some of the kills are also nice and original – lawn darts clearly make for an innovative weapon of which Angela Baker clearly missed a trick. One kill, original as it is, is also fairly harrowing for this type of movie. It gives a whole new meaning to ‘fuck me with a chainsaw’ and you could be forgiven for thinking that the victim here would probably be offed in far sillier way in relation to the type of painfully ditzy character she portrays.Still, it certainly makes you cringe in horror, so well done!

As for the characters I really loved Erin Russ’ ‘Rachel’ – she's the cool, sarcastic best friend to Ruby Laroccas do-gooder ‘Deborah’ and her scenes are all great fun. She is also a complete and utter nympho and yeh just watch the movie...she really will screw anything that moves! Ruby herself is as natural as ever and does the good girl routine with ease while both Chris Woodall and Brandon Raker are hilarious in their respective roles as ‘Richie’ and ‘Ian’. 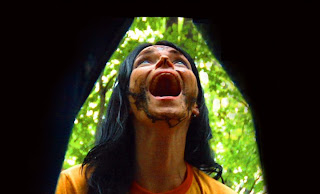 My main criticism ofPorkchop is that as cool as the killer looks, pig mask and all, he doesn’t seem to have as much presence as I would have expected. For a lot of the movies 93 minutes running time it’s much more about the rest of the cast ‘doing their thing’ with Porkchop suddenly appearing out of nowhere, attacking and vanishing again. A bit more chase with some of the characters or an extended final battle with Deborah at the end might have just made the villain a bit more rounded out (no pun intended!). Aside from that there are just the usual flaws found in a low budget movie such as some noise drowning out dialogue and some less effective performances – still you forgave all of that in the 80s so..... 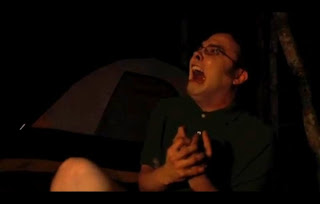 Eamon followed up on Porkchop (almost immediately!) with the outrageous and intentionally offensive Zombie Babies which you could also get a DVD of, for donating to the making of the movie. It seems like Eamon probably never sleeps because he then went right to work on Porkchops a sequel to this flick, which I cannot wait to see. Byall accounts the follow up is a darker and more elaborate affair.

A fun and campy homage to 80s slasher movies, Porkchop will see an official DVD release on December 6 distributed by Alternative/POP Cinema and you can read more about the flick and its sequel Porkchops here: