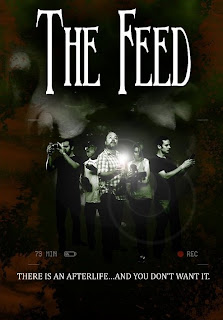 It's always great to see the found footage film done right, particularly as I am a huge fan of the sub genre. The Feed, I am pleased to say, is one such film - a fast moving, well scripted, well acted creep fest. 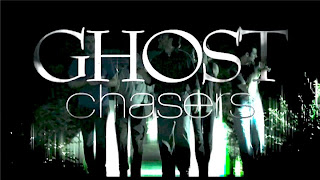 Concerning the 'Ghost Chasers' reality show who are celebrating their 4th anniversary on air with a live broadcast at the notorious Brenway Theatre, The Feed depicts what happens when you go ghost hunting in the wrong place! 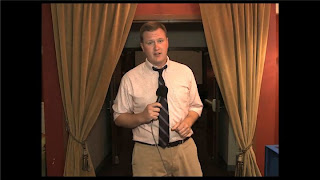 The Feed presents a formula tried and tested in many found footage horror films. you have your introduction to characters and location, a slow build up for a while, eventually odd incident upon odd incident starting to occur and then a big and busy climax. As I mentioned before its great to see this done well...some films in this sub genre really fall flat with a dull ending or there just isnt enough to keep your interest until the end (some films such as Apollo 18 are guilty of this and still don't award the viewer a satisfactory finale!) That all said, I knew I was onto a winner with this film as soon as the cast of Ghost Chasers introduced footage caught on tape of which the sender was not aware of. You are shown a video clip caught at the Brenway Theatre, depicting what appears to be a ghostly image...however the ghost hunting team actually realise that something far more sinister had been captured and the reveal of this is disturbing, gruesome and down right creepy. From here on out I was eager to learn more about the the theatres violent past and it is these stories which make the eventual appearance of the ghosts that much more effective as you are privy to the histories of them all. 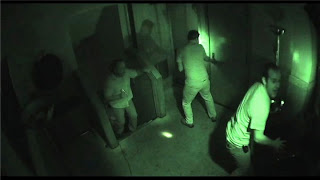 I really the enjoyed the faux cheesy credit opening to the Ghost Chaser show within the movie - a nice touch which introduces you to the characters involved in the unfolding mayhem. There are further nice touches in the movie such as the inclusion of advertisements to add to the reality show angle (one of these featuring an amusing cameo from Tromas Lloyd Kaufman). 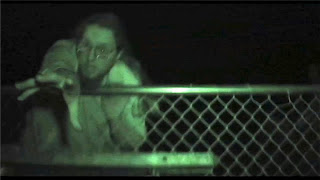 I also thought the cast did a great job in The Feed, the documentary part of it was nicely acted with all members effectively conveying that level of cheesiness apparent in the all of the ghost hunter type of shows. When the real horror begins I also thought several cast members, particularly Seth Dick and Briana Healy, made a great transition from acting to the camera, to truly terrified.

All in all The Feed is a solid independent horror film which also serves to give the found footage genre a decent boost. While it largely sticks to a formula we are used to, it also throws in some new additions as previously mentioned to make its own original stamp. This coupled with good performances, some effective scares and some utterly horrifying looking ghosts, The Feed comes highly recommended.