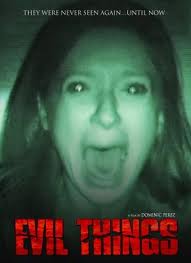 
Have you ever anticipated a movie for so long that you think you almost know 100% what to expect when it finally gets a release? That’s not intended in a critical way toward Evil Things, in fact quite the opposite. I was personally intrigued from the get go by this film and its slew of reviews it has managed to ratchet up over the past couple of years. I am also not ashamed to admit that I have been completely unnerved by its trailer every single time I have seen it.  Luckily for viewers the Inception Media group took this low budget little film, written and directed by newcomer Dominic Perez, and gave it an official DVD release in the US this month with a UK release hot on its heels.

The premise is ultra simple. In fact the movie as a whole is ultra simple – but it’s what makes it so effective.  Five close friends are driving off to a secluded country house in the Catskills Mountains for a birthday celebration while one of the group, Leo, captures their every movement on camera. Heard all this before? Yes probably, but this particular entry in the often criticised found footage genre (not sure why this is as they tend to scare me more than any other genre!) really manages to invoke the creep factor. There is just something truly frightening about the idea of a group of very innocent, fun loving people just being selected by a maniac who is planning their demise.

After several unsettling encounters with a van on route to their destination, the five friends are already on edge. Who is this guy? Why is he baiting them at every turn only to disappear again?  Well there is no answer to this and that only helps to elevate the feeling of fear that this film manages to scare out of the viewer. It’s a bit slow going for the remainder of the film as the friends begin to enjoy themselves and aside from a panicked trip in the woods where they find themselves lost, there isn’t much more of the scary stuff until the final ten minutes. But what a killer those last ten minutes are. A shocking discovery sends the group into a very genuinely attack of panic and I feel it is this particular scene which really makes the flesh creep. The final moments are a full on home invasion where, despite not being shown anything in the blood department, it’s safe to say that whoever was following these kids earlier on had a far more sinister plan up their sleeves and this is his (or her?) time to stake their claim. 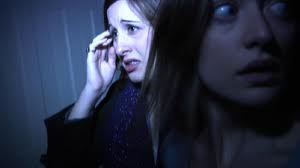 My main criticism of what is a very scary ending (including an very effective slammed door) is that the fates of two of the more central characters are left completely ambiguous – the first two victims you see enough to know they have been taken and/or killed but in a very rushed scene we are suddenly left with the one remaining victim. That said this final scene involving Cassy, our lead character, is absolutely bone chilling. I wouldn’t want to give away how it plays out but I will say that by this point the game has completely changed as far as who is filming the unfolding horror is concerned and it leaves a terrifying final fright for poor Cassy as she attempts to make her escape.  The final end reveal is also highly effective and answers some questions which you may have such as the sudden inclusion of a musical score toward the end. I would also add that the film didn’t need all the repeat footage throughout the end credits - it made me believe there may have been something new to discover to elaborate on what I had already seen but sadly not.

All in all if you have no appreciation for this type of horror movie then you would probably do well to avoid Evil Things – I highly doubt it will change your views on the found footage flick. Otherwise I hope you would find it as effective and unsettling as I did and can see the obvious potential in Dominic’s writing and directing. Also aiding the film immensely are believable performances from all five central characters, particularly Laurel Casillo as Cassy. She shows some fantastic comedic acting chops in one scene and her fear and panic at the end of the movie is nothing short of genuine.

I highly recommend Evil Things, it’s certainly worth your time, it’s a shame it may end up criminally ignored due to it being pushed aside for movies such as Paranormal Activity and sequels, but hopefully this won’t be the case. The movies official website can be found here: http://www.evilthingsmovie.com/Evil_Things_Movie/Home.html - check it out; it has all kinds of cool stuff which tie in with the aftermath of the events of the movie.