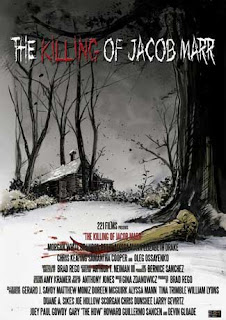 Picking up a copy of Brad Regos The Killing of Jacob Marr proved to be one of my more satisfying indie horror buys in the past year. A slow burning slasher flick with an all new and original villain, I found the movie to be both interesting and highly enjoyable/re-watchable.

Filmed in the Catskills Mountains in the midst of winter the film follows a rather standard slasher approach in having a group of friends travel to a cabin for some R and R. What helps to differentiate this from others of its type is the strong, fleshed out characters. Ted, Dan, Doug, Claire and Ellie are real people in a real and terrifying predicament. Nobody is portrayed as a stock character such as slut or geek and the dialogue is always authentic and believable.

So, of course being a horror film, all is not well in the area the friends are staying and unbeknownst to them a deranged killer, driven mad by an unknown force, lurks. Once one of the characters is taken, presumed dead, the tension truly mounts up among the group and as well as having to survive the relentless 'Jacob Marr' they also have to do battle with one another . I guess in a realistic situation it's all about the choices you make and whether those choices will land others in danger and that question is really brought to the fore in this film.

As I said before the characters in Jacob Marr really sold the film for me. 'Ted' played by Morgan White was so naturally portrayed that I hope there are lots more roles coming up in the future for the actor. A tense and powerful altercation between the characters of 'Dan' (Brandon Beilis) and 'Claire' (Alyssa Mann) really caught my attention - it's not often you get such a realistic representation of an opposing viewpoint in a slasher movie. Special mention also has to go to Elizabeth Drake who plays the slightly snobby group outsider 'Ellie'. Ellie's scenes where she is trying to find her husband is extremely well acted and made me immediately warm to the character - she needed to know what happened to him and I believed her. Jacob himself (Oleg Ossayenko) is a scary and relentless killer and I certainly wouldn't want to happen upon him! Adding to this is some great gore work. The kills are really well done and look great on screen - the jaw rip scene is very very effective.

The Killing of Jacob Marr is a real treat for indie horror fans who might be looking for something of a higher standard. Check out the film on the official Facebook and see if you can still grab yourself a limited edition copy of the DVD!
Posted by Mark B at 07:05