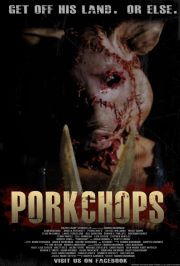 So, as mentioned in my review of Porkchop, Eamon Hardiman has rapidly followed it up with a sequel which I am pleased to say surpasses the original and offers a few new twists and turns.
Featuring Sam Qualiana as Simon, a young teen who is forced to move town due to financial difficulties and finds himself living right on the land of the infamous pig mask wearing serial killer Porkchop. Ooops. Befriending a free spirited young girl named Meg(Angela Pritchett) Simon realises he will have to keep his wits about him in this town – and that’s just due to the local bullies! Meg is only too happy to help fill Simon in on the bloody history of the town and appears to thrive on the stories of the legendary pig mask killer – not something other kids in school particularly love her for! Desperate to survive the horrors of school life, Simon devises a plan with Meg to win over the popular kids by way of a late night house party...Porkchop aint invited – but he is definitely attending!

One thing I really appreciated about Porkchops was it being set in the present day with the teen murders of the original a real tale of the past. Now I loves me an 80s slasher flick but rebooting the series in this way really freshened things up and that sold me immediately.  The film also has some great comedic moments – the childish idiot in me loved the scene with the girl wearing matching clothes to Simon. There is also a really amusing cameo by indie horror dude Shawn C. Phillips which made me laugh out loud.
Opening with a cruel and twisted double kill scene only goes to sign post what’s coming for the rest of the movie. If this puts you off, get out now, but if you like your horror deranged and offbeat then you will dig it. Kills from there on out just keep coming, there are a number of off screen murders but if you like your slasher flick with a high body count then Porkchopswill not disappoint you.  Quite a few of these scenes are truly creative, new and hilarious also!

As for the cast, I loved Missy Dawns ‘Hannah’ in this movie.She’s like a Sleepaway Camp uberbitch and her lines are almost nothing but profanity and put downs. Safe to say this isn’t the attitude for a movie about a crazed mad man and this eventually leads to a great chase scene with Porky, not to mention the movies most spectacular death scene. You have to see this one to believe it! Sam and Angela are great as Simon and Meg, there is a real chemistry there which is fun to see unfold.It was also nice to Kaylee Williams play a mean girl for once as she was all sweet and innocent in the last two movies I saw her in and the role of ‘Heather’?Not so much!
Also, as mentioned above there are some twists in this movie.One is halfway through the film and one right at the end. Both of these ensure a much darker tone than that of Porkchop,particularly the end one. It’s great to see Porkchop himself have far more presence in the sequel and as mentioned before there is a really great chase scene toward the end. Sure there are a few flaws such as some dodgy sound and I didn't really get the singing – plus there’s an insane looking scene on the back of the DVD which didn’t feature in the movie....but none of these harms things much at all.
So Porkchops is a fun, fast, silly and sometimes dark slasher movie which I highly recommend going into ready to have a good laugh with. I understand you can grab a copy left from the initial Kickstarter/Indiegogo fundraisers sogo here:  http://www.facebook.com/PORKCHOPSMOVIEto find out more!
Posted by Mark B at 12:22