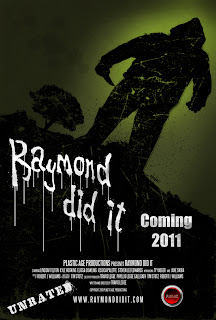 A childhood accident sets the scene for bloody mayhem in Travis Legges independent slasher pic Raymond Did It. In the tradition of old favourites such as Prom Night (and clearly influenced in terms of style by Halloween) Raymond Did It tells the story of mentally delayed 'Raymond' (Kyle Hoskins), a kid mercilessly picked on by the neighbourhood kids, who all happen to be good friends with Raymond's younger brother Bryce. A freak fall caused by group ringleader, and all round bad girl, 'Paige' (Elissa Dowling) leads to a grossly false accusation leaving poor, innocent Raymond in a mental hospital.

Six years later, the young group have grown up (well some of them have) with nice girl 'Tammy' (Lindsay Felton) now on the outside, trying to avoid the painful memories which have haunted her since Bryce's death. As for the others? Well there is not so much conscience involved here. Party girl 'Jayme' ( Jessica Palette) and her jock boyfriend 'Tim' (Steven Lee Edwards) are only interested in having a good time; whether it be drinking, dancing or sex. Laid back and lazy 'Edgar' (Jake Skiba) just seems to want a quiet and easy life, while Paige has just grown into a nastier, colder version of her younger self.

A shock announcement that Raymond has escaped and injured two orderlies in the process, sets the young groups teeth truly on edge as it dawns on them pretty quickly that they could well be in danger, considering the far reaching consequences of their lie. Its not long before one of the group is dispatched, in a cruelly creative manner, and those remaining prepare to fight, lie, kill, or all of the above, to survive. From there on out we get gory deaths and witty one liners aplenty making for a sure fire great time in the slasher flick department.

There is some fantastic acting in Raymond Did It. First and foremost it has to be said that Lindsay Felton is incredible as the guilt ridden Tammy. She portrays an authentic mix of haunted yet tough and her place as second runner up in VH1's 'Scream Queens' is well justified although watching her in this movie...I just wonder if she was robbed? Although I found her character Jayme a little confusing at times (ditzy followed by emotional and compassionate followed by sex crazed) I really enjoyed Jessica Palette in this movie and thought her acting was likewise impressive. She also gets one of the best scenes in the film...but that's towards the end.... so I cant say what it is! Kyle Hoskins was quietly effective as poor Raymond and I enjoyed all of his scenes whether it be killing or just talking in his slow and resigned manner. Elissa Dowling also makes her mark as the vindictive and heartless Paige - she is far more of a bad guy than Raymond is and the only death she causes in this film was an accident!!

Raymond did it is also very well shot, with lots of nice Halloween style touches. This includes sparsely populated streets, bringing back old memories of wondering where Michael Myers could possibly be lurking 'out there'. This time however its Raymond who could be literally anywhere...waiting to strike. There are also many decent POV shots of Raymond lurking behind trees and outside houses (or inside!). A really great job by Travis and crew.

I highly recommend picking up a copy of this well made, well acted and very fun indie slasher. The official DVD is out now on R Squared Films so what are you waiting for?
Posted by Mark B at 02:35