Writer/director Nate Hanley really delivers the old school slasher goods with his debut movie Camp Kill. Self released through the official site back in 2009, Camp Kill is a 'back to the roots', summer camp slasher flick which runs at a whopping great 160 minutes. That may (or not) put some interested parties off...but please don't let it. The films running time actually works wonders...there is such a large cast of characters, all in their own little groups or pairings that the movie just feels like it needs the time it has to breathe. You get great character introduction for the majority of the films length, but don't fret there is still a number of gruesome killings throughout this time until we get to the grand finale where there is many a-dropping of many flys!

The opening scene sets the bar for the film, with a young girl at her cabin at the titular camp, flashlight at the ready to investigate any 'strange noises'. Following this shortly is a fantastic scene introducing the killer by way of clenched gloved hands (an effective and menacing yellow), signalling the fact that the girl is trapped in the cabin with no means of escape.

The film features some great kills including death by fish hook and binoculars pinned to face! Most of these are all just really creatively done and flawlessly executed. It is also of note that all of this is done practically with no CGI whatsoever. I know this is something that director Nate Hanley strived for when making the film so hats off to him for achieving it. Add to this a great score, particularly during the scenes when the killer appears/strikes.

A lot of the characters are great fun in Camp Kill. Scarlet Salem is great as the spoiled, nature shy 'Jocelyn' who is permanently attached to her mobile phone - much to the chagrin of her best friend 'Sue' (Rachel Grubb). Derek Dirlam is hilarious as ultra goofy guy 'Joe' while Breanna Fuss' short role as the sweet, nature keen 'Kelly' is endearing. Special mention has to go to Eric Binfent and Sarah Ann as 'Lover Boy' and 'Lover Girl' - these two are highly amusing throughout and for a slasher movie their fates may just surprise you. 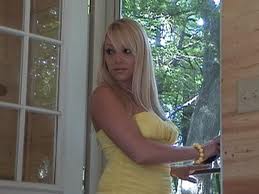 All I can really say to be critical of this film is there are some sound issues which are fairly typical of an independently produced film. When you consider what was made with an almost non existent budget (particularly the awesome kills) it's such a small issue.

So Camp Kill is a fun, creative 80's slasher throwback with a great cast, great sense of humour and kills to rival the best of the Sleepaway Camp movies. What's not to like? I strongly urge readers to hit Nate up through the official Camp Kill website and grab yourself a copy of the DVD. He is a friendly guy who is more than happy to answer your questions about the movie...plus if you drop him a review of the film he might even be kind enough to publish it on the website!