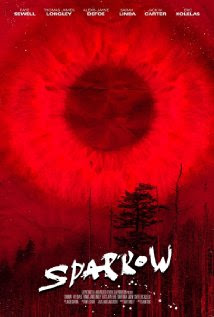 I can always appreciate a short and sharp slasher flick which pays homage to the 1980s. Thats precisely what this British slasher flick achieves in its 72 minutes running time and it kept me nicely entertained throughout.  Shot in Poland, Sparrow uses the well known premise of a group of friends entering the wrong woods and ultimately paying a very harsh price.

Camp Happy Dreams, aptly renamed Camp Nightmare, is the setting of a number of grisly murders and legend has it that 'Ranger Sparrow' a man sent mad by his wifes treachery, is still out there, hacking up campers like its 1983. Shame then for our rag tag group of misfits, Matt, Cindy, Kirsty, Duncan, Sitcom and Dawn, that this is far more than just an urban legend and they are soon going to wish they had stayed home......

What I liked most about this film was something that could have proven its downfall. Its so short and has quite a lot of chracters if you include the opening scene teenagers and the pot smoking couple a bit later on. But it just works well for the film - there is some nice, brutal gore early on and then we follow and actually get to know the 6 main players before the main carnage begins.  The ending subsequently is a total bloodbath!

I also thought the acting was great, very believable from all concerned, and the main cast could easily be a real group of bickering mates. Stand outs for me were eternal prankster 'Sitcom' (Jack W. Carter) and the allergic to bullshit, hard faced 'Dawn' (Alexis Jayne Defoe). But in all fairness the whole cast did a good job with honestly no weak performances!

The film also looks great. Its brilliantly shot, belies its budget completely and the camp setting looks sunny and beautiful. In fact it almost seems a bit of a suprise when the killer rocks up towards the end as, like one of the characters remarks themseleves, you dont expect a maniac to start hacking away in the broad daylight!

Gore wise there is a lot of nasty stabbing and slicing. The noises made by the machete blows sound realistic and a few of them actually made me cringe. There is also bloody splatter aplenty and a vicious head slice that will more than satisfy the gore hounds1

I really recommend this film. Despite the the films length working in its favour, it did leave me wanting more and thats a good thing! Head on over to the link at the top, support indie horror and grab a copy!