I have wanted to check this little film out ever since I first clapped eyes on its amazing trailer. Seriously, if you havent seen the trailer to this film yet, watch it and watch it now. Its truly brilliant. Thank you very much to writer and director Dan Fogler for not only sending me a copy of the film to screen but also lots of other amazing signed stuff and a copy of the Moon Lake graphic novel which is ONE TO BUY!

So onto the movie itself. In terms of plot it's very easy to surmise - theatre troupe head out to an isolated cabin and some lunar radiation causes one of them to lose their mind so much that the bodies start piling up. However in its actual execution it is admittedly a hard one to categorise. Its like Friday the 13th gets stranded in the Black Lodge by way of the Book of the Dead. That, if you weren't sure, is a compliment. It's not often you get such an inventively idiosyncratic spin on the slasher sub genre and I was hugely entertained throughout. Its even filmed in black and white with various scenes in colour peppered throughout. Not only that but we have animated narration! Tell me you have seen that before in a horror film other than in anthology style films such as Creepshow? I would also go as far to say that if this film isn't heavily influenced by The Evil Dead then I need to get my eyes tested! There are so many shots and scenes which act as a charming nod to Raimi's masterpiece that I half expected Bruce Campbell himself pop up in a crazy cameo! Sadly Brucie does not appear, but Dan Fogler has himself a very funny cameo at both the start and end of the film. The latter cameo proves just how much these guys are not taking themselves seriously with this film but just having a good time - and they clearly want us to have a good time with them!

On that note, Dan is clearly a very talented writer as the films comedic vein (which is practically bulging to the point of explosion) is just perfect. I laughed throughout the film even at some of the gorier moments, the comedy was just that spot on.

Oh and the gorier moments.... there sure are some. One standout scene sees a poor female having her eyes sliced before being thrown somewhere she, shall we say, doesn't have much chance of getting herself out of! There are is also a very brutal, not to mention extremely unfortunate stabbing near the end and various other nasty moments. Let's just say gore hounds won't be put off and those look for a good laugh will be well taken care of! 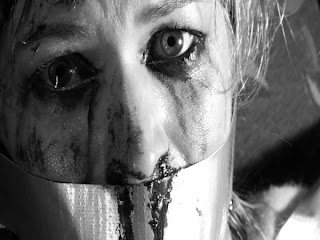 I strongly urge horror fans to check this film out when they can. It's a weird and truly wonderful take on the teen bodycount movies we all treasure from the 1980s and demands to be appreciated! Check out the films official Facebook page for more info and to find out how you can expose yourself to some lunar radiation yourself! Go GET it!