CLOWNING AROUND WITH ROBERT NOEL GIFFORD - AN INTERVIEW

With independent film maker Robert Noel Gifford's upcoming horror film 'No Strings 2: Playtime in Hell' looking set to make Chucky look like a Cabbage Patch Kid, I was keen to have a few words with the man behind the flicks creepy antagonist.  Larry, a clown doll possessed by a malevolent demon finds himself surrounded by a house full of beautiful woman who may just be on their way to becoming a string of unfortunate victims. Sound good? Yes I think so too! Please read on for Roberts thoughts on the movie, other projects and more! Also look out for an official review of No Strings 2 SOON!

Hacked in the Head: Hi Robert! Thank you for taking the time to talk to me. I have been interested in seeing your new film 'No Strings 2: Playtime in Hell' for some time! Could you tell me about the movie and how it all came about?

Robert: Well the second No Strings came about just by chance. I was working on a new script for another movie and hit a writer’s block wall. I was sitting in front of the computer giving myself the worst headache because I could not think of anything to continue the script when I decide to take a deep breath and just sit back and relax. Well my editing studio is not very big and right behind my main computers is my prop shelf’s and upon turning I was face to face with Larry the loving clown puppet (LOL) Larry was in need of some repair because he had been beat to crap durning the filming of the first No Strings, but since I had not planned on making a second film he was put up on the shelf with other older props. Within minutes it hit me to make a second No Strings film. I had everything I needed to do so, so within a few hours I was hard at work on the script for NO STRINGS 2 (playtime in HELL)

The second film I decided I wanted to have nothing to do with the first one which was a short film. I would keep the story of how Larry came to be and the Toy Makers deal with the Devil the same, but nothing else from the first film. Looking back I should have just titled the second film NO STRINGS (playtime in HELL) and keep out the 2. But what is done is done. Now everyone is looking for the first film which is out of print and I am sorry to say will not make a comeback.

Since I am a huge fan of the 1980’s horror films I try to keep the mix of humor, beautiful women, blood and crazy monsters at the front of all my films. I would rather make a film that is campy and fun to watch like the great films of the 1980’s 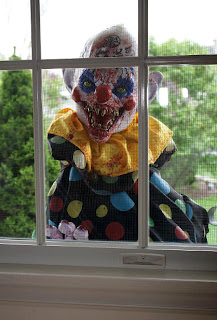 HitH: A true recipe for a fun horror film there!  I was also extremely excited to learn that the amazing Brinke Stevens landed a role in No Strings 2. How did this all come about and what was the amazing scream queen herself like to work with?

Robert: What can I say, Brinke Stevens is the ultimate scream queen ever. I have been a fan of Brinke’s from the moment I saw her first film. Even now just thinking I have the great Brinke Stevens in one of my films makes me smile from ear to ear.

I first contacted Brinke when I was doing an interview DVD, THE GREATEST WOMEN OF HORROR. Brinke contacted me back and was in for an interview for the project. So after that project, I contacted Brinke asking her if she would appear in NO STRINGS 2 in a scene with Melantha Blackthorne, who is another of my favorite all time scream queens and a great friend. The scene came about when I was not happy with how the film was ending and wanted something different, so I wrote an entirely new ending and then Brinke and Melantha signed on to film it.

HitH: I cannot wait to see her in it, she is a true credit to the horror genre. I am also very interested to hear more about No Strings' precursor which I know is a shorter film, sadly out of print. Would you ever wish to 'resurrect' the original film for fans to see?

Robert: I have been asked many times about this and sorry to say that no the first film will not make a comeback. The first film was filmed on the lowest of the low budgets and while it did create Larry it is not a film I would like to see back in print anymore.

HitH: That's a shame but I am sure fans will get enough blood and laughs out of the sequel so it's all good!  I see you also have several other films under your belt. Would you like to tell fans a bit about your other previous projects?

Robert: Yes I have been making low budget horror films since 2006. Started with little 10 minute films and worked up to the full feature. I have had the chance to work with people whom I admire. Like the great front man for the band LA GUNS Phill Lewis. Working with Phil was one of the great moments of my film career. He is fantastic to work with and an amazing person. Also working with Centerfolds and models from Playboy, Scores etc has been a plus and so many more amazing people, I just feel as if I have been blessed.

Some of my works are THE WISHING BOX, which at first was a full length film, but then edited down into 2 short films for my THE DEATH HOURS series, which are DVD’s that feature my short films. Another is DIRTY LITTLE DEAD THINGS a short film featured on THE DEATH HOURS dvd series.

HitH: What do you love most about working in the film industry and similarly what are your pet peeves?

Robert: I just love to create, from films to fantasy/horror art, music, writing, etc…… I love it all

HitH: Is there any advice you give anyone out there interested in getting into filmmaking? Particularly within the independent horror genre?

Robert: I guess the only advice I can think of is develop a hard outer shell, because this industry will eat you alive if you don’t. I mean there have been times I just wanted to drink myself into the grave because I could not believe how cruel some people could be. Feelings don’t matter a lot of the time, so if you are easily hurt and sensitive then you should think about another career, because if you are easily wounded by rejection then this is not the industry for you. I mean there some amazing things also such as the wonderful people you get to meet and work with and just seeing your visions take shape, but I just have to be truthful, you need to handle rejection with ease and always hold your head up high even when you want to bury it in the ground.

HitH: It never fails to impress me the sheer devotion that horror movie fans show the genre. So I am guessing that It must be overwhelming for you , as an indie film maker, the kind of support and appreciation for what you do, shown by people across the world on sites such as Facebook etc?

Robert: OMG I love the fans, they are the only reason I love to still make films.

HitH: I have checked out some of your fantastic artwork in Facebook and it seems like something you are quite passionate about. Tell us more!

Robert: It is my favorite passion. I have done many fantasy/horror pieces of the most beautiful women in the film industry today. People like Glori Gold, Melantha Blackthorne, Kaylee Willams just to name a few. I do all my artwork for my DVD’s and posters. I will spend days on a piece until it is perfect in my eyes. I formed a company around my art called CRIMSON MOON STUDIO. Just put up a FaceBook page for it where you can check out many of my works.

HitH: That's fantastic news Rob, I urge people to check this site out pronto!!! Also LOVE Kaylee Williams, she's amazing! Next up I would really love to know..... what are some of your all time favorite horror movies and why?

Robert: My favorite films of all time are


HitH: AGREED on the Evil Dead front, 100%!!!! Finally Robert, is there anything further you want to share with fans about your work both previous and upcoming?

Robert: The second THE DEATH HOURS will be out soon and I will be starting up new productions early next year and all I can think of to say to everyone who has and does support me is THANK YOU.


HitH: Cant wait!!!!! Thank you so much for your time Rob and we look forward to hearing more news on your films soon!