UK produced indie horror film Slasher House is soon to recieve its UK premiere before heading out for the festival circuit. Its great to see more homegrown horror coming our way so keep your eyes peeled for this one! The film looks set to be a dark and creepy good time and you can view the brand NEW trailer for it right here:


From the Press Release:

From Mycho Pictures comes a new slasher movie that will change the game forever.When Red, a young girl, awakens in a house, she has no idea how she has come to be there. Exploring her surroundings she soon realizes that she is not alone, in fact she is trapped inside with some of the most notorious serial killers in the world. Now it is a race against time as one by one the cells open and each killer is unleashed to stalk her through the inescapable corridors of the SLASHER HOUSE.

SLASHER HOUSE is the second feature film production by Prize Winning Independent Studio Mycho Pictures and is our biggest and best to date. The film stars rising horror talent Eleanor James (Forest Of The Damned, Hellbride) and was produced on a shoestring budget in 2010/2011.The Film is currently seeking Distribution. 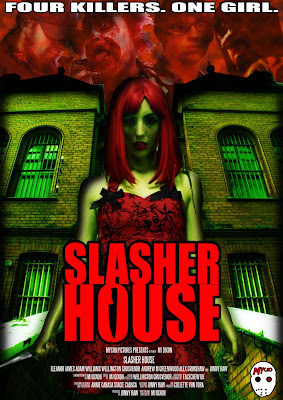