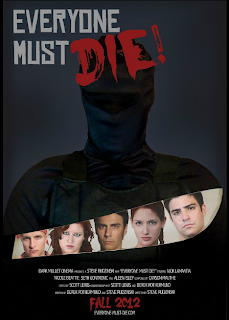 Director and writer Steve Rudzinski was kind enough to share his indie slasher flick, Everyone Must Die, with me and I am pleased to say its a very funny, fast paced, good time. For the most part it doesnt bring anything new to the table, you have a masked slasher hacking his merry ole way through various townsfolk with a great big machete BUT there are some nice differences thrown in that I really appreciated. For one the killer is steeped in mystery and has a baffling way of survivng the most brutal attacks by his intended victims. How he manages to keep coming back and continue his killing spree is beyond me and while you may be thinking well...Freddy? Jason? it is just presented in a different way in this movie. Plus it sets up a nice little twist in the tail for later. Also I like the whole angle taken with the killers movements; he doesnt have an intended group of teens that he is out for revenge against, he just moves from town to town, killing all the way along.

The main plot of the film concerns Kyle (Nick LaMantia) who has lost his sister to the madman and learns that, although recently pronounced dead, he is still out there and Kyle, quite rightfully,wants revenge. Banding together with a group of  partying teens they must stick together to finish our masked slayer off, once and for all. Suffice to say there is soon blood spray and hacked limbs aplenty and I would like to add that these guys do not hold off on the gory goods.

The comedy in this film is also spot on. There was one moment, in a campfire scene that made me laugh out loud. Maybe I'm just not observant enough but when the four teens decide to go to bed, I did not see that pairing up scenerio coming. Loved it. In fact one of the teens, 'MC Pink' (Seth Joseph)  was really funny during this whole segment, a complete wally but very likeable and endearing. In fact the MC Pink comedy continues throughout the movie and provokes all kinds of hilarious conversations (the gay vote was just brilliant)

A lot of the performances were good also. I particularly liked the too cool for school Jenny (Nicole Beattie) and the ditzy and rich Kat ( Erica Benda). The scene where Kat is contemplating whether she might be a killer or whether they were all killers was just side splitting and I think Erica Benda has a bright acting career ahead, she is made for comedy. I also thought Steve Rudzinski himself as the campaign driven Pete was really funny, Pete is such a nerd but an enjoyable one to watch.

I hope Everyone Must Die gets out there in a big way. Its made with heart and an obvious love for the slasher sub genre and provides a nice mix of a tried and tested formula with a decent touch of originality. Also without giving any spoilers away? Stick around for the end of the credits.....
Posted by Mark B at 08:10