Gallery of Fear, brought to you by Alan Rowe Kelly (Blood Shed, I'll Bury You Tomorrow) and Anthony G. Sumner (3 Slices of Life) is a brand new horror anthology which may well be the most enjoyable one I have seen in a long time. The film is fairly long, at two hours, but it's so tightly structured and entertaining that you would hardly notice. In fact I would have been disappointed if it were shorter as the brilliant wrap around needed the screen time it had (more on that later) and the three tales of horror were just the right length. I will break this review down into the various segments and give my overall thoughts on them. 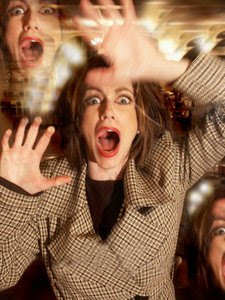 Critics Choice, serves as as the glue that holds the film together, and what a wraparound it is. Indie horrors Debbie Rochon plays, with aplomb, the uber bitch, art critic from hell complete with foul mouth and killer outfit to match.

She’s all blonde streaks, vixen red coat, and is also a most unpleasant individual indeed. Debbie Rochon, in short, as Roberta Van Houten, is amazing&nbsp. Roberta is on route to a Gallery opening in a remote location, being driven by a creepy, mute chauffeur (David Maranacik) and appears to be taking vicious delight in her potential opportunity to tear apart the work of more budding artists  After yelling all kinds of obscenities at her assistant, and taunting her driver for his slow speed, Roberta is dropped off in an ominous location…and promptly left there stranded. Debbie really goes for it in this scene, going absolutely ballistic due to her predicament and it is in this scene alone that you can tell why someone such as Debbie would be invited to mentor horror movie hopefuls in television shows such as ‘Scream Queens’. She’s done it all, she’s done it so very well… and now she’s doing it even better.  So as Roberta stomps around in her killer heels, threatening (practically let’s face it) death to those who have screwed her over, a strange building suddenly comes into view, as if from nowhere. Deciding she hasn't just been ditched in the middle of nowhere, Roberta enters the building, ready to tear some bollocks off for her recent inconveniences. Turns out, she is in an art gallery….but there’snot a whole load of art to look at, and there is no one else there but her.  Exploring the gallery, Roberta spots some champagne and begins to make her rounds. From one picture concealed by black cloth to another, Roberta begins to unveil the mysterious art, and with each picture, she is drawn into a tale of terror, which we, as an audience, are lucky to also be invited to…….
An awesome wraparound tale with a wickedly sharp performance and a very fitting final scene, viewers will love this I promise.

By Her Hand She Draws You Down 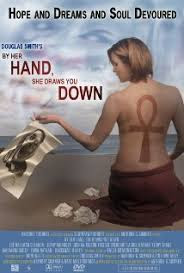 First up is Anthony G. Sumner’s haunting tale of hunger,depression and subtle vampirism, By Her Hand She Draws You Down.  I was lucky enough to get to review this horror short for Hacked in the Head several months ago and I am pleased to say it rewards repeat viewings.  Zoe Daelman Chlanda plays ‘Cath’ an artist who drifts from town to town with her husband (Jerry Murdock) sketching passer-by’s for extremely  sinister reasons.  Her put upon husband must keep a close eye on her, because when her hunger takes over she becomes more and more unscrupulous in whom she is willing to use to satisfy her deadly urges.  Fantastic and compelling performances elevate the bleak and unsettling plot into a short film demanding of your attention.Both leads create characters filled with despair, desperation and a yearning for a better life and this comes across all too well. Whatever it is that has taken its grip on Cath’s soul cannot be destroyed and although you are never certain on exactly what it is, you see enough of the dark force to know that it’s otherworldly and horribly dangerous. The short ends in suitably depressing fashion and in doing so presents the opportunity for a follow up short, or even feature, sometime hopefully in the future. By Her Hand She draws you Down,is a horror film not to be ignored and is a satisfyingly fitting opening segment for Gallery of Fear.

Next up is Alan Rowe Kelly's Down the Drain, also starring Jerry Murdock. The film concerns poor old Stanley Moffet, a horribly put upon substitute teacher who is tormented by his students,berated by his boss and treated like absolute dirt by his greedy and selfish ex-wife Sylvia (a winning performance by Raine Brown). However, it seems that something out there doesn't like the poor treatment wrought upon Stanley on a relentless basis and is watching him from afar. But what is it and what does it want? Well it turns out it wants to maim and eat those who are making Stanley’s life so miserable, as Stanley himself soon discovers after being beaten and humiliated by a pair of local thugs. As for what it is?  Let’s just say it has scales, makes some very questionable noises, and lives in the drains…..
I loved this short. It’s like some of best ‘douchey people get their just desserts’ episodes of Tales from Crypt, where you just know that the characters presented in the most despicable of lights are not going to make it to the end with a smile on their face. In this case most of those smiles are torn right off. Jerry Murdock as in By Her Hand, does another impressive turn in his role.Stanley Moffet…what can I say? He is by turns, laughable, tragic, sad, out of all control of his life and I loved him and felt sorry for him every step of the way.  The victims to be are a real assortment of low life’s (aforementioned thugs) spiteful bitches (Sylvia,Stanley’s delightful ex) bullies (the teens at school) and total condescending slime balls (Stanley’s boss, the sly little Principal at the local school) and it’s disturbingly gratifying to see them fall foul of Stanley’s new found protector and friend.  I also like how  the anthology veered right from the outright sad right to the rather sad yet ultimately campy and hilarious Down the Drain. So far so very good.

A Far Cry From Home

The last segment of Gallery Of Fear was the one I will admit to anticipating the most.  I have heard a hell of a lot of great things about A Far Cry From Home for a long time and being a fan of Alan Rowe Kelly's previous features and enjoying his roles (BIG love for web cam vamp in 3 Slices of Life)I was eager to check this one out. A Far Cry From Home has to be one of the sharpest, 'hillbilly' horror flicks I have seen and it was fantastic to see the film go for the serious approach. Blood Shed was great specifically FOR its campy and comedic tone, but this film works 100% per cent due to its dark and realistic nature.  The plot of the film involves a gay couple, Lane (Alan Rowe Kelly) and Kayle (Don Money) who are on a trip to try to repair their relationship problems. Lane is a cross dresser with an age complex and Kayle is a younger  guy with a more laid back nature…hence the couples main issue. Still its clear they are very much in love and their truce when they pull over to a remote store is really sweet and touching. However, said store really was the wrong place to stop and both  Lane and Kayle are about to fall foul of a family of  backwoods psychopaths who do not understand that gay doesn't mean evil or dirty and that the world has actually progressed beyond 1941!!!  Katherine O’Sullivan shines for all the wrong reasons as the local store owner and aunt to her psychotic nephews (Jerry Murdock and Benzy). In fact, all three play their characters all too well and despite them being horrific people in the film; they were all a pleasure to watch. Alan Rowe Kelly who serves as the star of the film as well as its writer and director, plays a fantastic role as the vacationer turned survivalist 'Lane'. The role required grit, passion, sadness and fury and Alan's character more than delivered this and was pretty mind blowing to watch! The film also really delivers in the gore department, not overly present in the rest of the movie. Featuring several really cringe inducing moments of evisceration and impalement there is more than enough on offer here to satisfy the gore hounds out there! My only minor gripe would be that I wished it had ended differently - but you will hopefully see what I mean by that when you see the film yourself!  Personally for me it’s important to highlight the hatred that exists in the world. There’s no answer to it, no solution and for many, the numbers of sad people who hold such hate filled views, you could never hope to change their minds. A Far Cry From Home highlights the ignorance of some people to powerful effect and for this reason along with the impressive cinematography and outstanding gore, is one of the very best horror shorts I have been lucky enough to have seen!

Gallery of Fear is more than worth your time, it was made with heart and passion is a truly entertaining two hours of horror and laughs. Please check out the movies official Facebook page to find out more and I hope to be able to post news on an official release date soon!
Posted by Mark B at 03:04