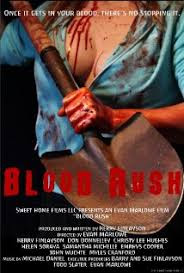 Marking the feature film directorial début for Evan Marlowe, Blood Rush takes its low budget, sticks two fingers up at the constraints, and delivers something funny, suspenseful, gory and really quite captivating. Captivating can be hard to nail on an indie feature as sometimes the lack of funds leaves a lot of scenes rife with meandering conversation, in order to get to another scene of action. Here though the story is told in such a clever way, jumping back from the present time to the past which is important to the current unfolding horror. Using this plot device audiences are slowly let in on the events leading to situation experienced by a small town, with many residents fighting to survive.

So what's the actual plot you ask? Well it's a zombie film in essence. But it puts a new spin on the sub genre and I loved that about Blood Rush. We start with the introduction of Kara (a natural and tough as nails performance by producer Kerry Finlayson) who falls afoul of her bloodthirsty sister Emma (also played by Finlayson) and seeks sanctuary in her home where she comes across two shared friends in hiding. We are treated to a flashback of the friends before whatever time the recent horror took hold and learn some interesting facts about their lives and relationships. Back to present time our three main girls, Cara, Lucy (Christy Lee Hughes) and Kate (Helen Soraya) along with Danny (Don Donnelley), the cheating husband of Emma band together to get out of their town alive, before their afflicted friends, loved ones and neighbours find them and...well...eat them. There are suspicions as to what has caused the Zombie outbreak but you never actually find out the true cause. That actually gives the movie a more interesting edge and is actually quite scary when you weigh it up. Imagine if people close to you suddenly turn savage, desperate for human blood? With no explanation? Quite chilling I think. The movie propels toward a bloody climax as more locals either die or succumb to the blood lust and turn on the survivors and what transpires from this is a number of excellently staged gore effects such as a flying eyeball, womb munching foetus and much more! There is also a great two tiered ending, with each of these parts ending with a chilling final scene, particularly the latter.

The acting is pretty impressive across the film save one or two slightly weaker ones. UK born actress Kerry Finlayson does a great job of playing both the kind hearted, tough fighting Kara as well as the angry, betrayed housewife Emma and I can't wait to see more of her work. Remember she also produced this film with Evan and wrote it so she had her work more than cut out for her! I loved the character of Danny, he has some fantastic one liners ''How are we going to get anywhere with stumpy and preggo over there!?'' and this character brings a lot of the comedy to life in Blood Rush. Also special mention to Samantha Michelle as the spunky Jessica, and I loved all the acidic conversations between the church going locals.

Sweet Home Films marks a new name to watch in independent horror. They bring something old something new and a lot of the gory/fun to the arena and that should be recognised. Check out their official website and Facebook and keep a close, popped out, eye on when you can check out their movies. I highly recommend Blood Rush.
Posted by Mark B at 08:13