Third horror flick from the nefarious Infernal Films is a gutsy and gory ride from start to finish - something you may have come to expect if you have seen their previous films! Thanks again to Lars Rohnstock to agreeing to send me a screener copy of Necronos: Tower of Doom - very pleased to check it out!


So the story goes like this - Necronos is a henchman of the devil and a downright nasty one at that. After a previously failed attempt, he has invaded Earth to create his own army of the undead and his mission to achieve this begs for some despicable acts of murder and sacrifice. It seems, however, that the devil thinks Necronos needs a little help in this department and so sends him two further incarnates of evil to aid him. This pair are two people you would never wish to cross paths with - 'Goran', a blood demon and 'The Mighty Witch' (played by indie horror mistress Manoush).  As it goes a virgin witch is required to make this terrible trios plans a reality and a no holds barred assault of torture and murder is wrought about scores of innocents.

I think this film amps the gore quota right up compared to the already splatterific Graveyard of the Living Dead. There are several full on look-away-now sequences in this film which I would say is true hardcore gore. The pole pentration scene is suitably nasty and the murder of the pregnant lady is gut wrenching and disturbing. The double decapitstion on the other hand is really cool and exremely eye popping! 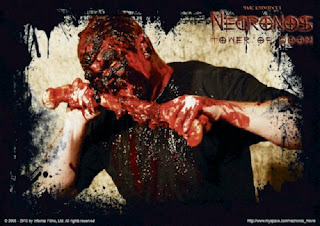 I enjoyed this nasty little indie flick. Its relentlessly gory, a bit campy and doesnt give a damn what people might think. Its also well made, fairly well acted and  although its running time was a bit too long for me, it certainly keeps your attention throughout. Hats off also to the amazing artwork for this film! Just look at that incredible satan image, its fantastic! I was sent a number of movie postcards for the film alonng with my screener (as well as posters) and I was quite honestly blown away at the the professionalism and sheer awesomness (technical term) of the art.


Find out more about the movie and the good people of Infernal Films right here !