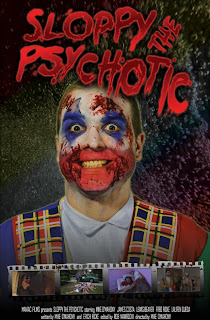 Children's birthday parties will never be the same again.........

Maniac Films second feature following slasher throwback Deadly Detour, lovingly cranks the bad taste factor up to infinity with crazed clown horror Sloppy the Psychotic. I have to be clear that that is not a criticism from me - I found the movie to be both entertaining and hilarious and I think that horror movie fans looking for a gory good time - which doesn't outstay it's welcome - will get a real kick out of Sloppy.

Concerning down on his luck Mike, Sloppy the Psychotic, explores what happens when a dude has just had enough. Living at home with his nagging parents, working as a not-so-successful children's entertainer (aptly calling himself Sloppy the Clown) and being constantly harassed by the locals, Mike (Director,Writer and Producer, Mike O'Mahony) is slowly but surely losing his mind. The final straw comes when he loses his job followed by some further humiliation by a few local a-holes and this is when Sloppy the Clown gives himself a deadly makeover into Sloppy the Psychotic!

I enjoyed the scenes where 'Mike' paints his face in time to a macabre version of 'Pop Goes The Weasel'. Its an effective and even slightly creepy sign post of the insanely high body count to follow. That said this is the only really creepy scene of the whole film. The remainder is an eye opening kill fest which demonstrates what might happen if you piss off the wrong clown! I'm not sure where to begin here but you have anal impalement, urine drowning, mass poisoning, 'grilled brat', vehicular slaughter and SO much more. Things get batshit crazy, I promise you that! The ending of the film is also a killer - literally. It may possibly cause offence to some (I can imagine a number of mothers going off the deep end at this scene!) but if you take it in the intended spirit then you should just be able to revel in the sheer audacity of Erich Ficke and Mikes O'Mahonys script. It's supposed to be tongue in cheek and I think its definitely pulled off in that way so just  enjoy it for what it is. I might also advise you to give some careful consideration to who you are asking to perform at your child's birthday party from now on!!

Mike O'Mahony impressively has dual roles all over the place in this movie. Not only does he direct, produce, co-write and do the special effects he also plays the downtrodden central character: 'Mike'. Mike, you really cant help but feel for in this film - he is just one of life's nice guys (you might disagree after seeing this!) who cant catch a break. Even when he releases his pent up rage and starts offing kids like its going out of fashion, I cant recall truly thinking of Sloppy as a monster.Maybe that's an issue I need to work through though....

Acting wise there were some weak performances, such as a few of the parents at the end and some of the pool party kids - but there are also a number of really good ones. Mike as...well...Mike played his character really well as mentioned above and I also thought his female friend was great and should have had a bigger role. Its a shame we didn't see her again after her few scenes. The low budget nature of the movie is very obvious from the outset, but I don't think you go into a film like this expecting top notch special effects or Oscar winning acting. What has been made with a small amount of money has been made with a real love for the genre and a lot of heart. Blackened heart ...but heart all the same.

I hear Sloppy the Psychotic will be available to order on DVD VERY SOON so to find out more about the film and its upcoming release please visit here. Its also screening at the next Cinema Wasteland, held in March in Strongsville, Ohio. Specifics on this should be forthcoming so keep an eye out if you are lucky enough to be able to attend!