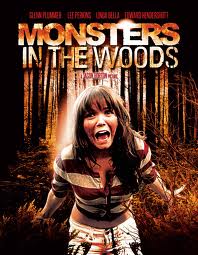 A low budget creature feature with blood, boobs and gags. The film misses the mark for me but the intentions are clear and some more money may have made this a brilliant  little popcorn flick.


Monsters in the Woods  tells the story of a film-maker and his cast/crew bending to the usual studio pressure by taking off to the woods to film some gore/T&A to 'improve' their production. That's life after all and people want to make money! Throw in some quirky characters such as the sparky Script Supervisor (Ashton Blanchard) pissed off actor Burt ( Edward Hendershott) sexy make-up girl Ariel (Claudia Perera) and down beaten Director (Glenn Plummer) up against some truly mean looking monsters and you have the recipe for a fun and campy horror flick. Sadly for me Monsters in the Woods was a great idea let down by some performances, a bit of an overblown story and lack of funds. I dont blame writer Jason Horton going for something more interesting with his script at all but in this instance I couldn't help but think 'why cant there just be monsters that happen to be in the woods, killing people?'.

The story veers from a few nasty attacks on the crew to a plot concerning an angel hell-bent on wiping out the beasts before they claim their intended twelve victims. It's ultimately up to actors Burt and Bianca (Gladys Otero) to get out of the woods in one piece before the creatures (which are actually hellhounds) complete their heinous plan. In spite of saying all of that, I still think the movie sounds like it could have been a hell of a lot of fun, but in this case I just feel that its low budget got the better of it in a number of places. Take for example the scene in which a blonde actress refuses to believe warnings about the monsters and ends up a victim. Unfortunately it's so poorly acted that I cringed for all the wrong reasons.

I can usually take a horror film with flaws if there are aspects to make up for it and there are some fun gore effects. Possibly due to budget there are an awful lot of cutaway kills but there are also some nice gory, comedic touches. For example: aforementioned Script Supervisors untimely face removal. She's understandably upset that a hell hound just took off with her face but she just kind of...continues with the group...for a while anyway. Its silly moments like this that give the film a really enjoyable angle - its supposed to be laughed at and it works. I also really enjoyed the ending, firstly with the final two survivors and then the additional part involving a bickering family in their car. The final monster shot was also really cool and actually made me then want to continue watching!

Its shame to be negative as I really wanted to enjoy this little indie flick. It has a fun idea behind it and I bet it was a hoot to make, therefore I wouldn't deter anyone from checking this out. I'm still very keen to check out Jason Hortons previous film Trap and intend to do so ASAP.

Find out more about Monsters in the Woods  here and if you think it might be up your street then you can pick the DVD up from all good USA retailers on 21 February.