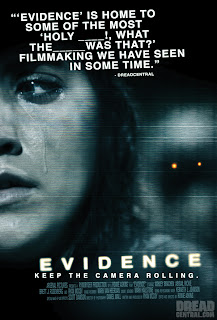 
I love the found footage style horror film. That's a total fact. Its a tricky sub genre to love at times because there are soooooo many duds and so few truly effective and/or terrifying ones out there. However, when they are effective and/or terrifying they are truly brilliant and for Evidence, despite a bit of a dragging opening, really hit the mark. You may think you know pretty much what you are in for with this film if you judge it by the trailer but trust me - you don't. I don't think I have ever seen a film of this type where things get so damn crazy in the final 30 minutes. What starts as a 'four friends' hunted by a mysterious creature flick turns into something far more interesting and elaborate and it is this that gives Evidence a superb edge.

The film tells the story of four friends: Ryan, Abi, Ashley and Brett who are heading off camping so that Ryan can film Brett for a project. Brett isn't keen on Ryans' intrusive filming and the girls are just there for a laugh so its not long before petty squabbles and drunken antics kick in.The morning after the night before, the group catch an eerie glimpse at what appears to be a large creature in a nearby ravine. So what exactly is out there? And why do the group suddenly get the horrifying feeling that they are being hunted? It's this fear that begins to cause a nasty friction within the group and very soon the really bad stuff begins. It's the final 30 minutes that the film veers from a simple beast in the woods flick to an elaborate, conspiracy style horror film and it's an exceptional way to stun viewers. My only complaint about the ending is the final credits. The last scenes are brilliant, don't get me wrong, but they are also extremely important. Therefore while splicing these scenes with the end credits was a cool way to end the film, it was also a bit distracting, I personally felt.

The acting in Evidence was pretty great across the board. All of the initial scenes where the friends are drinking and joking around came across as very natural. When the character of Ryan starts to become nasty and aggressive, Ryan McCoy (Also Evidences' writer) plays it extremely well and I for one, by this point wanted him gone! Both girls are convincingly terrified and desperate to survive in the final act and there is a scene with one of them which made me jump in horror. You will know it when you see it.

Another plus point for the film is the way in which it is shot.We are not treated to a lot of the often dizzying side effects of a found footage style horror film. Sure, when things gets a bit frenetic there is some crazy camera action but it never feels like being trapped on a very unstable rollercoaster for the movies running time.

Evidence is an inventively written, well acted, and often frightening good time. Find out more about the film and its upcoming UK DVD release here -I think this is one you will want to check out!