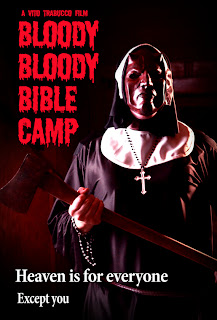 
Hillarious, gory and downright wrong - Vito Trabuccos Bloody Bloody Bible Camp takes us back to the sleazier side of the summer camp slashers of the 80s. When I say sleazy think the likes of Sleepaway Camp where characters were not your typical kind hearted counsellors or happy go lucky campers. While films such as Sleepaway were not intentional comedies (well the original anyhow) like BBBC is they are still comparative in their inclusion of unsavoury characters with less than honourable intentions. 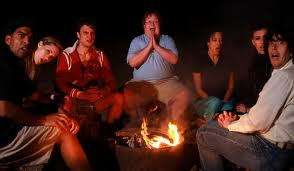 So what's the movie all about? It's 1984 and a group of bible thumpers are headed to the Happy Days Bible Camp for some fun, frolics and supposed harmonising with the good Lord. Unluckily for this hapless bunch, the camp was the setting of a grisly massacre back in 1977, supposedly at the hands of a crazed nun named Sister Mary Chopper. Being an homage to the slasher pics of the 80s it's safe to assume that the lives of the new arrivals are very much in danger and when Mary Chopper makes her reappearance, heads will literally roll! 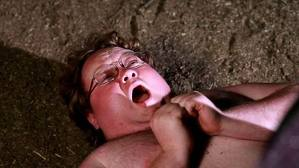 While it does take its sweet time in getting to the gory goods, BBBC manages to keep viewers entertained with its abundance of what I call 'wrongedy'. Because while the film is very funny it is 100% wronger than wrong. That's fine by me as its my favourite type of comedy, it's never intended to be taken seriously! So you have: perverted men of the cloth, musings on Jesus' manhood, crucifix sodomy, Shelly Duvall used as masturbation material (yeh you read right) and much much more. If you read all that and felt physically sick then...maybe steer clear.Otherwise enjoy it for what it is! Comedy besides, once the movie hits it's final act there is gore galore! Heads fly, crotches are chopped and campers are crucified - with all effects practical and done really well to boot! Special mention also has to go to the slash happy opening sequence which depicts the 1977 massacre mentioned previously. It's a brilliantly inventive way to roll your opening credits and I'm sure a lot of red blooded horror fans will love the final freeze framed shot...I won't spoil what that is but once you watch this..well you will know!

Tim Sullivan shows some impressive acting chops here which is great to see. I love his work as a Director and it was fun to see him doing something completely different. Reggie Bannister is truly entertaining as the suspiciously named 'Father Cummings', the less than well intended head of the camp and special mention must go to both Matthew Aidan as the ditzy jock and Jennifer Sonneborn as the camp bimbo respectively who have the funniest one liners throughout the flick. I also thought Deborah Venagas as 'Jennifer' played her moody goth character really well and 'Timmy'...well 'Timmy' just scared me! Its a shame that the always game Elissa Dowling wasnt a main character but her scenes at the start were very funny so I am sure people will love this part.

I am also pleased to announce that there are zero sound and picture issues here as found in a great deal of low budget films - the film looks and sounds professional and the soundtrack is both appropriately dark and light depending on the scene. I was also really impressed with the scene where darkness descends on the camp and all the clouds start to roll, it looked like a great homage to the scene in Friday the 13th where Jack and Marcie get caught out in the sudden rain storm.

In short, if you are looking for a gruesomely good time, with a  lot of laughs, then you cant go far wrong with Bloody Bloody Bible Camp. Stayed tuned for news of a wide DVD release through the official movie site and Facebook page as I hear Sister Mary Chopper is coming to a convent near you soon!