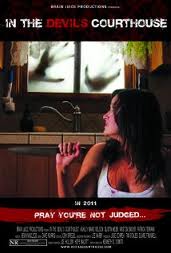 
A low budget monster flick which delivers some great gore and an effective atmosphere of being hunted by the unknown.

Set in the Appalachian mountains, the movie features 'Leah' a young woman on the run from the mysterious beast which has slain her boyfriend. After putting a panicked call through to her police officer brother 'Steve', Leah seeks refuge at a nearby house, resided by a family of three. Soon Leah's brother shows up with his girlfriend 'Lauren' and cop partner 'Max' and those still alive must try to make it through the night. Unluckily for them there is also a group of happy clappy girl scouts out in the woods, many of whom will be judged before the night is done.  I must start by saying that the movie does a good job of keeping viewers entertained. The horror kicks off immediately and there are enough characters and attack scenes to satisfactorily fill the 85 minutes running time.

Some of the characters grate a bit. The bitchy character of Lauren (Kristen Snider) is the main culprit - her constant whining and acerbic comments made me want to kill her. Luckily viewers will get their wish as Lauren suffers the best death scene in the film; an insanely gruesome tree branch impalement. The after shot of this particular attack scene just looks incredible so hats off to the team in charge of the special effects. I really enjoyed Ashley Marie Nelson and Dustin Webb’s performances as sibling leads Leah and Steve. I found their strained relationship to be realistically conveyed and Ashley in particular did a great job of acting scared yet determined to live.

Some viewers may be surprised by the movies rather sad and downbeat ending. I wont give this away but will mention that it includes a brief but effective 'found footage' scene where we get an idea of the final fates of some of the remaining characters. There is also one last scene involving one of the Pine Cone girls which I don’t really feel added anything to the movie as a whole. That besides I enjoyed the way the movie wrapped up and there is definite potential for a follow up.

I would recommend checking out In The Devil's Courthouse. It is an entertaining little indie horror with a decent script and some great gore. You can see that the budget was low but the film looks well shot with very good audio. Head on over to Brain Juice Productions.com to snag yourself a copy of the DVD!