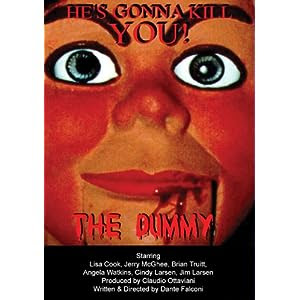 
The Dummy is a 1995 SOV effort from Todd Jason Cook, director and writer of previous cheapo horror efforts Evil Night and Demon Dolls. I LOVE me a killer doll horror flick so of course the thought of a crazed ventriloquist dummy had me excited!

The plot involves a pair of newlyweds, Chris and Laura, who make the grave error of insulting a fortune teller. Said fortunate teller exacts her revenge using the titular dummy, instructing it to kill anyone who has the misfortune of coming into contact with Chris and Laura and eventually taking them out themselves! One pissed off lady then!

The film turns into a total bloodbath as our friendly resident dummy starts hacking his way through all manner of luckless victims in his mission to eliminate the newlyweds. There is lots of fun grue and gore as people are stabbed, slashed and a whole lot worse (look out for the knife to mouth scene...)

Bottom line is that The Dummy is an ultra cheap movie so you can't go in expecting stellar acting, amazing sets and top notch special effects. What you will get however is a fun and bloody low budget horror flick with a brilliant little antagonist and, I have to say, an awesome little final scene. Safe to say this Dummy will NOT be beaten easily..... On top of that the film has a nifty giallo-esque score! Check over HERE and HERE to find a copy for yourself! A new late night low budget favourite of mine to have fun with, with a few beers!!

You may also be interested to know that Todd Jason Cook has recently released his zombie slasher hybrid Zombiefied which is a must see and reflects the direction that Todd is now taking with his mobvies now the good ole SOV days are behind him. I strongly recommend giving Zombiefied your time and you can grab a copy HERE.
Posted by Mark B at 12:42