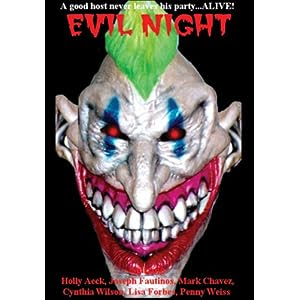 
Many thanks to filmmaker Todd Jason Cook (Zombiefied) for sending me copies of three of his older SOV horror flicks from the 90s for my watching and reviewing pleasure! I have always been interested in Todd's older films after hearing stuff about them in the past, old trailers and obviously from really enjoying Zombiefied!

Evil Night marks the earliest of the three efforts that Todd has shared with me and I had a heap of fun with it. It's extremely cheaply made (a main clue is SOV!) with some ropey acting and sometimes dodgy effects BUT its also a fun slasher movie with a sense of humour and an inventively cruel streak by way of some crazy kill scenes.

So the plot: Jimmy Fisher is the college nerd who is constantly subjected to the rich kids harassment. After a nasty prank results in Jimmy being injured he decides enough is enough and uses his expertise in science to create a telekinetic ability just perfect for killing his enemies in some of the more nasty but fun ways you can think of! (sounds far fetched? Yes? GOOD) Kills scenes wise we are talking exploding cigarettes and spiked hazing paddles here people! So it's kind of like Carrie on benefits but that's not a criticism - I love ultra cheap and ultra fun, it's precisely the reason I started this blog in the first place!

If you are looking for a trashy, gory and hilarious good time, you can't go far wrong with Evil Night. Check out the following link to see how you can grab your very own copy from Screamtime films and look out for my reviews of The Dummy and Demon Dolls coming very soon! If you know you dont have the patience for the lowest of low budget horror films then I advise staying away but...well its kinda your loss.
A true guilty pleasure.
Posted by Mark B at 11:30