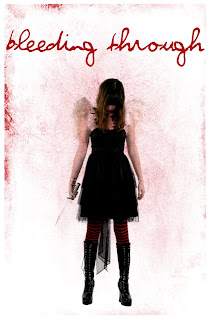 Bleeding Through is the latest feature film from indie filmmaker, actor and musician Henrique Couto and I would like to extend my thanks to the man himself for allowing me to review it for Hacked in the Head.

The film serves as Henrique’s first real foray into serious horror and I am pleased to say it’s a damn fine foray indeed. Imagine if you will a sad but engrossing and emotional drama which morphs effectively into a blood splattered horror movie in its final act a la Carrie (1976).

The overall plot involves young college student Lindsey (Sandy Behre) a girl shattered by the deaths of her parents in a car accident and further tormented by life in the form of some local bullies, a condescending boss and her slightly unsympathetic brother (Henrique Couto). Lindsay’s luck changes for the better when she meets the free spirited and fun Katie (Ruby LaRocca) and their budding friendship acts as a pleasantly emotional turn around to a rather bleak existence. Still I did compare this movie to Carrie so therefore you may not be surprised to know that this friendship isn't made to last and a final betrayal acts as the final straw and prompts Lindsay to end the life she has grown to find so insufferable.

If those people partly responsible for the deep depression wrought upon Lindsay think they are out of the woods with her passing they are horribly mistaken as the final act makes way for Lindsay’s brutal search for revenge – beyond the grave.

I really loved the supernatural angle of the plot. Henrique could have gone down the route of young Lindsay simply snapping beyond all salvation and embarking on a bloody killing spree but instead, Lindsay’s suicide added a nice curveball to proceedings and I felt this added far more meat to the plot.
For gore fans there is quite a bit to enjoy in the final part of the film. Dead Lindsay is not the meek couch potato that alive Lindsay was and when it comes to inflicting pain on those that hurt her..well…she isn't backwards in coming forwards let’s just put that out there.

The acting was a huge plus point in Bleeding Through. I would say all characters do a good job but both girls, Sandy Behre and particularly Ruby LaRocca absolutely nail their roles. Sandy goes from a shy, withdrawn, sad young woman to a vengeful angel of death with professional ease. In fact Sandy's acting is so good, particularly in the first hour or so of the film that you actually share the pain she appears to experience in communicating and interacting with others. Ruby LaRoccas Katie on the other hand is a perfectly acted, vivacious and fun wildchild who may not be all that a good friend after all.

The film is also really well written; the dialogue is bleak at the best of times, but absolutely engaging, drawing you deeper into the plot as it motors towards its grim climax. Its also really well shot and I felt incorporating elements of home videos featuring Sandy's parents when they were alive was an excellent way to make audiences more involved in the plot and Sandy's sad plight.

I really enjoyed Bleeding Through and it I think it puts Henrique Couto out there as someone to really keep your eye on in independent cinema. You can preorder your very own copy of the film, released early next year right HERE and I strongly recommend you doing so.
Posted by Mark B at 03:07