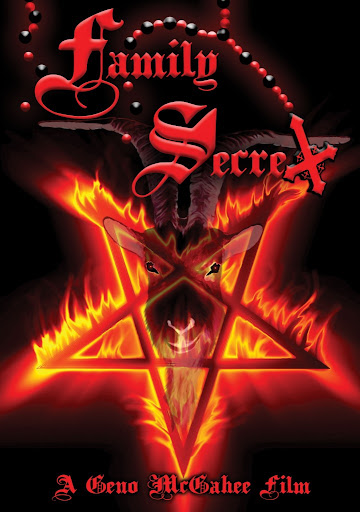 Many thanks to Geno McGahee for sending me a copy of his micro budget slasher flick Family Secret for review. I was very interested in this film due to it featuring a killer in a granny mask (!), no less, bumping off family members following a funeral of...you got it... their wicked old relative. I loved the premise and so was keen to see what Geno and co had come up with.

So as mentioned, an extended family are gathering for the funeral for the evil old head of the clan who has left a lasting and negative impact on her 'loved ones'. Bitterness and conflict rises to the surface as family members reunite and as if that wasn't bad enough somebody, possibly one of their own, is intent on eradicating them all for good. As the murders escalate, Geno (Forris Day Jr) must investigate in order to catch the culprit and in doing so unveil a long kept 'family secret'.

As Family Secret  progresses it gets more and more enjoyable. I think my main complaint would be that there is some really awkward dialogue in the first 20 minutes or so and to be honest made me worry about the remainder of the film. That aside, once the killings ramp up and the mystery deepens, the film really successfully draws you in and this should be applauded. The reason I say this is I know how tough it is for indie film makers not to produce a feature length film which tells a good story but in doing so pads out a long running time with boring and meandering scenes. What is done so well in this film, despite it's 110 minute length, is not allow the viewer to get bored and actually get more interested about what is to come. In terms of gore there are several decent slashings and gory head wounds and a plethora of torn throats. The film may have benefited from one or two more creative or unsual death scenes but it really isnt the end of the world, the killers mask more than makes up for the standard slasher kills and most of them are well done.

After viewing Family Secret I am very interested in seeing what Geno comes up with next, I hear there are two new films on their way, a horror anthology, Scary Tales  and monster movie Sickle - sounds good to me!

All in all I recommend giving this little flick a chance. It has a nice mystery, some enjoyably unlikable characters and a surprise end which relates effectively to the family secret of the title. Check out the movies official Facebook and while you are there why not head over to Amazon and snag a copy!
Posted by Mark B at 07:19