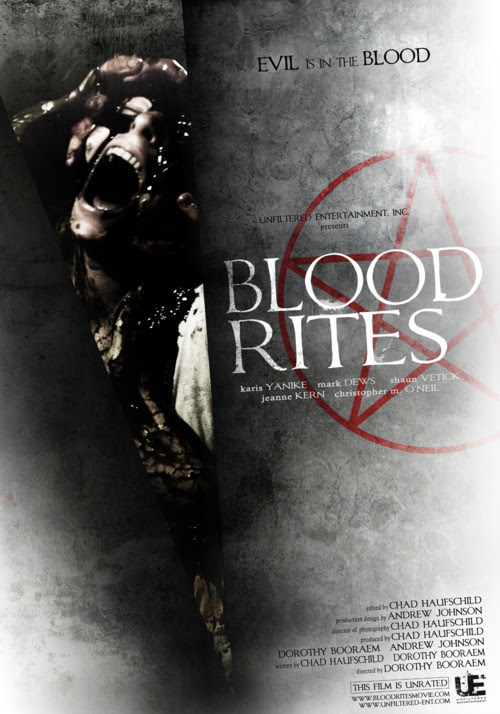 After enjoying Dorothy Booraems directorial debut Wake the Witch, I was really intrigued as to what she might come up with next. True, Wake the Witch confused me a bit and I wasnt 100% sure after viewing it if I was clear on the ending, but I remember being glued to the screen throughout and found some sequences really quite unsettling throughout. So..... fast forward to 2012 and I have been given the chance to review Blood Rites, the follow up film directed by Dorothy and and co written with Chad Haufschild.

Nikki (Karis Yanike) is involved in a drug deal which goes horribly horribly wrong leading her to become trapped in an abandoned warehouse with a group of others including crazed Axel (Mark Dews) and his three religious hostages. Also along for the ride is ex military enforcer Darrin (Shaun Vetick) and gunshot victim 'Diz' (Cristina Marie Leonard). Running parallel to this is the murder investigation into the ritualistic killings of three young girls, attacked while experimenting with witchcraft which further adds a level of intrigue as to what might be coming......

I am happy to start off with saying I thought Blood Rites was quite the blast. It had a slightly slow burning opening yet still managed to draw you into the various threads of the story, of which I had every faith would start linking up as the film progressed. I'm pleased to say that this happened and soon all characters are faced with a fight for survival...but against who? Or what? What I will say is not everything is how it seems and whats going on maybe isnt what you think. Its actually a very clever plot which takes its time to unfold and I found the final scene of the movie satisfying because I kind of thought "ok I wasnt expecting yet another twist and I wasnt expecting it to end like that in terms of a certain characters fate". Its great and it worked very very well.

Acting wise I thought Karis Yanike did a superb job as the in-it-up-to-her-neck Nikki. I really enjoyed this seemingly conflicted and desperate character firstly trying to make sense of her messed up scenario and secondly pulling out the stops to try to survive it. Watch this character very carefully.  Mark Dews was also excellent as the drugged out Brit criminal 'Axel', a guy who you do not want to get into the line of fire of...let's just say he really does shoot first and ask questions later. Further to this Shaun Vetick turns in a suitably creepy performance as the (strongly implied) sexually deviant Darrin. I also enjoyed the hostages and their roles in the movie, lots of odd and creepy things going on there that you will have to watch for yourself to know what I mean!

All in all I think Dorothy and Chad have written and produced a decent, twist filled horror/thriller with some effective murder scenes, an intriguing religious angle and some hugely unlikeable yet very watchable characters. I recommend getting your hands on this when you can and giving it a chance, I think it will surprise you! You can find out more about the film over at their official website - check it out!