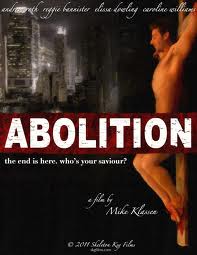 Director Mike Klassen delivers the creepy goods with his religious themed mystery Abolition, raising the question whether somebody living on your very doorstep could be responsible for the end of the world. Sounds promising huh?

The biggest plus point for me watching Abolition was how immediately engaging it is. Characters and events are so intriguing that I found myself drawn right in, eager to found out how everything would turn out in the films climax. The film is rather slow burning, yes, but slow burning never has to mean boring which is where Abolition really excels. You have a story which doesn't need to rely on gratuitous violence and sex throughout, but the character driven plot is so finely woven  none of this matters.

After a macabre opening involving the death of a young woman we are introduced to our lead character. Josh is is a very confused and haunted young man, plagued by mysterious black outs. Regularly finding himself at the scene of somebody in trouble he subsequently feels compelled to help them. The only problem with this is that this help seems to come at a price for somebody else. Soon Josh finds himself on a path to discover who he really is and what his real purpose in life is. I wouldn't want to spoil anymore of the plot but will just say Abolition provides a great mystery full of compelling drama.

The acting in this film is excellent. I can't recall one weak performance from any of the actors. Andrew Roth is superb as the tortured Josh. I think there is a definite successful future for him out there both on the indie horror scene and as an actor in general. Elissa Dowling absolutely nailed the role of Mia. The last role I caught Elissa in was playing an uber bitch from hell which was fantastic and fun as well as suitably campy for the type of film it was. Here however, a far more serious and emotional performance was required and that's absolutely what is delivered. Its always great to see Phantasms Reggie Bannister on screen and Caroline Williams small role as Joshs' mother is both  touching and important to the plot.The film is also very professionally presented, well shot, perfectly audible sound.As well as this the soundtrack is really great, very haunting and a perfect fit to the suspenseful story.

My only complaint about Abolition is that I was so sucked into it and had grown very attached to the charcaters, that when it hit its final scene it felt like there should have been more. That said this end more than sets up a potential sequel so hopefully there is even more to come from Mike Klassen and company.

I understand that indie horror champion R Squared Films has picked Abolition up for a 2012 DVD release which is great news. Fans of smart, well scripted supernatural thrillers are going to find a lot to love about this flick.
Posted by Mark B at 07:26