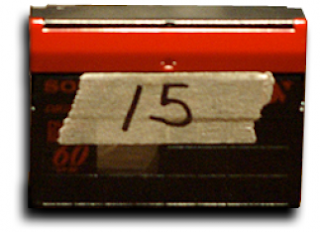 
Its not often I admit to struggling with the content of a horror movie (so don’t expect it to happen again!) but here is a film that really challenged me. It isn’t because it’s a bad film, it’s actually really well made, brilliantly acted and downright chilling. However it’s also unflinchingly graphic and hardcore in places and there were several moments I really found difficult to watch. If you check out the movies official website here - you will see this is all intended in what they were trying to convey with 15.

15 tells the story of Jack Hamil, a struggling camera man who leaves his wife to travel to the home of self confessed serial killer Edward 'Ed' Payne in order to document him before he hands himself over to the police. Joined by the enthusiastic but slightly acerbic Brenda, the pair intend to elevate their careers by getting into the mind of a man who has claimed to have killed a number of woman over the past decade, without the law coming even close to catching him. Meeting the mild mannered Ed (Played by Director Jason Hawkins) starts a slow burning journey, which if you are paying attention at the opening credits, cannot possibly end well - at all.

Scenes in the opening twenty minutes where Jack hears crying and music in the middle of the night are absolutely get- under-your-skin creepy. A further fright evoked by Jack leaving his room to investigate the noises is equally as unnerving and honestly made me glad I wasn't watching 15 late at night before switching all the lights off! Things only get more disturbing as the film crew try to get Ed to open up about his past, indicating very quickly that things are not right in the slightest. If they were not sure if this guy is for real or not before, a scene where Ed goes ballistic and storms out tells them otherwise. So the creepy atmosphere and uncomfortable tension has been well and truly set up by this point, but that’s nothing compared to the horrors that soon occur. There is one scene later on in the movie that is so utterly repulsive that I struggled not to stop the movie for a break. It is very graphic, doesn’t shy away from anything and makes for seriously horrific viewing.

The acting in 15 is brilliant, with no exceptions. The material is so dark, brutal and raw that it required actors who could really step up to the challenge, and you definitely get there here - particularly in case of the three leads. Natasha Timpani plays the ambitious, budding journalist perfectly. Brenda is ultimately a very complex character and I think Natasha tapped into her various personality shifts excellently. She starts out a bit cold towards Jack - she knows what she wants and what she intends to gain from the project and isn't prepared to settle for less - be it subpar equipment or ineffective shots or camera angles. Her facial expressions depicting her discomfort and weariness in the earlier scenes are superb. The character goes onto becoming a warmer person once she realises Jack is good at his job and the project is going better than they had hoped. However this doesn't last as Brenda suddenly goes all femme fatale about halfway through the movie leading her to a very grisly discovery. I don’t want to spoil anything for readers but there’s even more to come from Brenda before the movies end so hats off to Natasha Timpani for her multi faceted portrayal of a truly fascinating character. Jack Hamil is very convincing as a guy beaten down by life, desperate to make amends with his wife financially. He is only doing this project with one goal in mind and that’s to provide for the wife he feels he has let down. Unfortunately for Jack he gets pulled so far into Ed Payne’s twisted world that there isn’t any coming back. His screams of terror and disgust in the film’s final moments show a real talent and made me truly feel for him, despite some of his previous, shall we say questionable, actions. Director Jason Hawkins plays the twisted mad man Payne almost too well...here is a man you would never want to find yourself alone with. Happy smiles and offbeat quips mask a hideous monster who is not at all choosy about who he inflicts torment and pain upon. Once that monster is fully revealed, Ed Payne becomes a character who may just haunt me for some time to come. This terrifying killers final words at the end of the film will likely leave you cold.

The movie also pulls off two twists in the brutal finale. One of these I had guessed from a previous dialogue from one character and the other...well...stunned me...and continued to stun me after the reveal. This aspect of the film will really get to viewers, I can guarantee!

So in summary, 15 is a very hard pill to swallow in its very uncompromising nature. Don’t expect to go into this one and feel uplifted afterwards as it just isn’t going to happen. However the film is 100% effective in what it has set out to achieve and certainly leaves its mark. I highly recommend viewing this film BUT you have been warned: NOT FOR THE EASILY OFFENDED
Posted by Mark B at 03:57