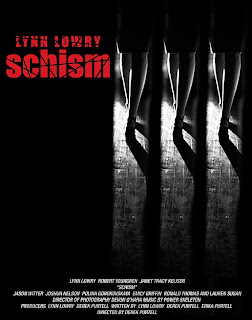 Thanks to Director Derek Purtell for sending me a copy of his low budget horror thriller Schism to check out. I have to start by saying I really love the cover art for this movie - it reminds me of some semi-gory Sharon Stone type of thriller from the 80's such as Scissors, Sliver and of course Basic Instinct.

The premise itself  is also very intriguing and quite original. The always watchable Lynn Lowry (Shivers, The Crazies, Cat People) plays talk show host Linda for 'In Touch With Insanity'. The show involves Linda speaking with mentally ill people to try to help them, although has its own unique selling point in that Linda herself has a severe mental health issue. Living with four personalities has taken its toll on Linda and any one of these can rear their head at any time, including seductive show off Lola and acerbic and angry Jackie. Referring her callers to the shady doctor who is helping her appears to be a bad move as the gruesome murders soon begin. On that note I must also add that the opening of the movie was really quite nasty and gruesome and definitely captures your attention and there are several other decent moments of gore to follow.

The movie then went off in a different direction than I maybe expected. Viewers begin to die but not at the hands of a mystery assailant like I assumed. Lets just say some of the people calling into Lindas show really are crazy and dangerously so! But is there even more to it than that? You will just have to watch and find out....... I will add that I enjoyed the very end of the film a lot where it kind of finishes and then does an about turn.

Acting wise there were weak performances by some of the supporting actors and actresses however there are also a few notable ones. Lynn plays her character(s) extremely well and bear in mind she is four different personalities, but Janet Tracey Keijser stole the show for me as the horribly damaged 'Anna'. Anna is a character I really cared for immediately and is the type of person who is either ultimately doomed or will do an about turn and fight for her survival in order to come out the other side. I won't give away which camp Anna falls into but will say Janet was really excellent in this role.

I felt that this was an interesting movie with a great idea although the story may have been a bit ambitious. I definitely applaud Derek and Erika Purtell and Lynn Lowry for writing something more elaborate than just another mystery whodunnit but maybe if the story was a bit more simplified it would have made more of an impact. That said, I would recommend Schism which you can check out via the films rather nifty website.
Posted by Mark B at 11:00