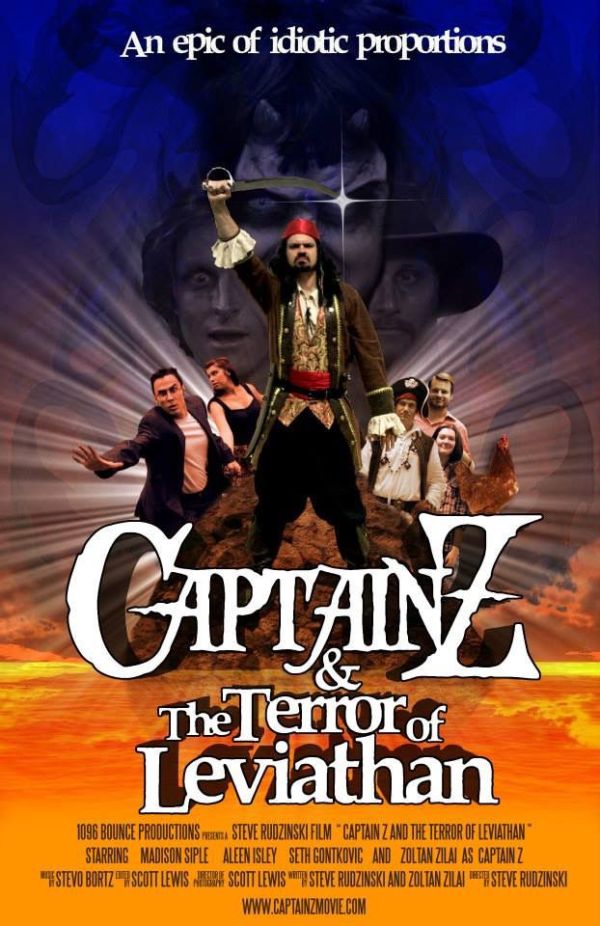 After checking out and reviewing Steve Rudzinski's comedy slasher Everyone Must Die, I considered myself a fan and eagerly looked forward to his next project.  Steve was nice enough to ask me to check out an online screener of his newest film which is as wacky as its title: Captain Z & the Terror of Leviathan.  Asked to direct the film by co writer Zoltan Zilai, Steve soon found himself cast as the lead character Glen, for those who want some background!

Starting off in 1714, Captain Z (writer Zoltan Zilai) manages to avert a bloody disaster when a group of possessed townsfolk almost raise the horror of Leviathan via magical amulet.  Fast forward 300 years and it appears that history is doomed to repeat itself when a ragtag group of hillbilly's get their grubby mitts on aforementioned amulet.  Its not long until they are too possessed and being led to raise Leviathan - but not to worry, the legendary Captain Z has been transported to present day too and he isn't going to take this lying down!

In a nutshell this movie is hilarious and entertaining. It absolutely does NOT take itself seriously if you hadn't already guessed that and this made me love it even more. It has some well written comedy and also a great separation of characters and their individual identities - something that is always important to me personally.
The acting was engaging and worked well toward bringing the various characters to life. Steve totally shines in front of the camera so its no wonder he ended up playing Glen - impressive work. The hillbillies were all a lot of fun and local museum employee Heather (Madison Siple) also shone. Zoltan Zilai's performance as Captain Z is delightfully OTT - lots of laughs here.

Hats off to Steve and Zoltan for a fun movie which, refreshingly, is not in the slasher sub-genre (and I love slasher movies). It has good laughs and lots of adventure making for a highly entertaining hour and a half.
Posted by Mark B at 05:32 No comments:


Varsity Blood follows a group of teenagers partying it up on Halloween on the anniversary of a local tragedy. What they did not count on was a vengeful killer to arrive with the intent of picking them off one by one by one by - yeh you get the picture.

As the group of cheerleaders and jocks dwindles to next to nothing its up to new girl in town Hannah (well played by Lexi Giovagnoli) to unmask the maniac and try to escape with her life! Who knew moving would turn out so fun...

Varsity Blood is one of those films that sounds great on paper - an 80s style slasher film complete with costumed, mysterious killer. In fact the mascot costume worn by the killer is one of the most fun and interesting (if impractical) I have seen for ages.

Where I think this movie failed to hit the spot for me personally was the lack of imagination beyond the costume.  This kind of film will likely have slasher fans screaming out for some creativity in the kills and a more focused separation of the characters identities. Sadly both are fairly generic, and while I enjoy a good old fashioned generic slasher plot wise, I really enjoy well drawn characters and some offbeat kills even more.  It got a bit hard to really tell who was who while the arrows (points for the killer using a bow and arrow!) were flying all over the place and I ended up not really caring who lived or died sadly.

For those looking for a quick and easy slasher fix I certainty wouldn't deter you from this film, Its got the babes, the blood and the general chaos you would expect with a madman descending on a group of vapid teens. I would personally still be keen to see what Jake Helgren has up his sleeve next, its just a shame that Varsity Blood didn't deliver what I thought it might.

Not too long ago I had the opportunity to interview writer/director Stephen Wolfe about his upcoming horror comedy Doll Factory a film I have been excited about ever since!

Now producer Carlos Tovar has very kindly shared details of the films upcoming premiere (why oh why do I have to be stuck here in the UK??)  and some exclusive poster art!

The poster has a fun 80s style to it which only endears me to this flick even more. It was designed by horror artist Nathan Thomas Milliner and I am sure people will agree that it promises a fun ride.  Check it out below along with details of how YOU can see the film!

From the official press release:

“For the Doll Factory key art, I wanted to go for a classic creature feature look and feel,” explains Wolfe, “so I reached out to a well-respected artist named Nathan Thomas Milliner. Milliner has created artwork for a wide

variety of classics including the Scream Factory anniversary DVD/Blu-Ray releases for Halloween 2, Halloween 3, The Howling, Terror Train and others. His unique blend of realism and eye for dynamic artistry elevated the key art well beyond anything we could have created in-house. It perfectly captures the spirit and tone of the film.” News and updates from “Doll Factory” can be found on the Official Facebook page (http://www.Facebook.com/DollFactoryMovie).

The film is scheduled to screen in Houston, TX on October 29 before beginning a 2015 horror festival & convention run''