British horror icon Thorn gets another outing in the newest film from MYCHO entertainment. Yep its prequel time for the dreaded super villain and MJ Dixon takes us back to the glorious 80s in both setting and tone.

Going back to Thorns reign of terror pre Slasher House, and the action-horror big event that was Legacy of Thorn. seems like the next logical step. As per the official synopsis:

Bethany Lovell has struggled to fit in her whole life. Between over bearing parents and her odd behaviour she has always felt like she was on the outside. That is until Avondale's popular click kidnap her for a surprise birthday party to celebrate her sweet sixteen.
What they don't realise is that Bethany is now the target of the urban legend known as 'Thorn' and tonight he has returned for her and nothing will stand in his way, as the Bloodletting Behemoth cuts his way through the small town in search of his latest victim and only one person can stop him. 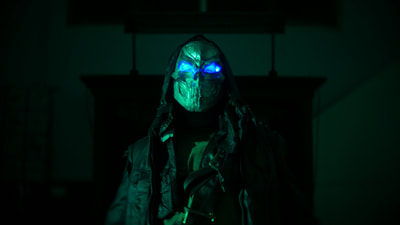 Opening with a gruesome hospital set prologue the film sets the tone with an eerie soundtrack and MJs trademark use of lighting to great effect. Then we move from the 70s to the 80s where young Bethany Lovell (Eve Kathryn Oliver) is living a fairly unhappy life with her anxious mother (Tracey Chatterley) and overbearing and strict father (Martin W. Payne). Bethany is subject to firm rules and her father hating her best friend Olivia (Sophie Bryant) really doesn't help her social life.

Bethany's problems get so much worse when a group of kids led by Olivia, take her from her home in order to throw her a surprise birthday party. However its more of a shock than a surprise when Thorn shows up. Once Thorn emerges from the shadows dispatching a nearby workman, the film kicks into full on slasher mode as we know Thorn is making a beeline for the teenagers party and intends to kill them one by one.... 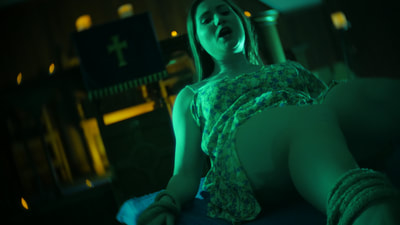 The film does a clever job of delivering a slasher movie but with other elements such as conspiracy and ritual murder which I really appreciated. There were some standout performers my personal favorites being Lydia Cashman as the acid tongued bitch from hell Janet and also Tracey Chatterley as Joyce Lovell, Bethany's strange mother.

I am really loving when MJ Dixon and MYCHO are bringing to the UK horror scene - MJ always has his own unique vision to go along with his horror influences and should be applauded for that. I would urge people to check out and purchase the MYCHO films released to date - you have insane killers, a creepy clown, an evil spirit - what more could you want!? Please check out the official MYCHO website HERE: http://mycho.weebly.com/

As far as I am concerned Thorn is welcome back into my film collection anytime, he's brutal and mysterious and scarily relentless.  Great job to all, thoroughly entertained. 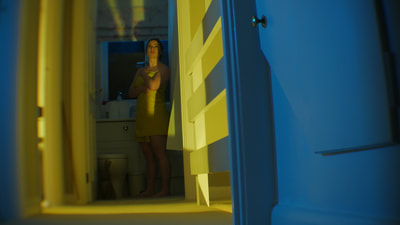