Written and Directed by Tommy Faircloth

I wont lie - I was extremely excited when Tommy Faircloth of Horsecreek Productions, allowed me a sneak peak at his sequel to the campy cult classic Crinoline Head this weekend. Like, beyond excited.  I am a big fan of Crinoline Head with its 80s slasher tone, cool kills and bizarre assortment of characters, some with their very own unique lingo! Also it has a psycho wearing a crinoline skirt to cover his/her face so...you know....!

The sequel focuses one of the two survivors of Crinoline Heads killing spree from 20 years previously, now a college teacher. Paul Donner (Jason Vail) doesn't like to talk about those events so it comes as a shock to him when two of his pupils,  David (Christian James) and James (Gunner Willis) wish to do their research project on local legends on the one and only Dorchester Stewart - the young boy who became Crinoline Head after a traumatic childhood event (if you haven't seen the original fear not, Dorchesters childhood is nicely covered at the start of this movie).  This brings back hideous memories for Paul who doesn't prevent his students from undertaking the project but is clearly affected by resurrecting his disturbing past.

David and James decide to camp out at the site of the murders and are joined by fellow students Shelby (Kirsten Ray) and Donna (Leah Wiseman) who ask to tag along. They are also trailed by several other students, meatheads Scott (Nicholas A Sweezer) and Reggie (Cameron Turner) along with slutty and spiteful Janet (Elizabeth Mears) who claim they 'are not' there to steal David and James' idea.  Another bump in the road is the shotgun wielding Betsy (an insanely awesome performance from Debbie Rochon) who lives on the property in her mobile home and isn't happy at the intrusion on the land.  Of course they all have FAR worse to fear as the present starts to mirror the past and the bodies begin to pile up. Is Dorchester Stewart really still alive after his ambiguous end back in the 90's....or is someone else responsible for this new blood shed?

There are a lot of great things to shout about with this long awaited sequel. Firstly its aesthetically great; really well shot and directed and comes off as 100% professional. Sometimes an indie feature can suffer, although not always, from sub par camera work but this isn't a problem in the slightest here. Secondly the writing is spot on, hilarious dialogue, some great one liners, and some excellent nods to the original film and other classic horror films..... "plug it up" being particularly  superb...

In terms of acting I was really really impressed. Scream Queen Debbie Rochon seems to be having a ball with her material in the role of Betsy. Gun toting, profanity spewing and oversexed, Debbie owned every single scene as this character. Explaining each and every one of her very obvious sexual innuendos had me in stitches. The lead teens played by Christian James and Kirsten Ray were great and had believable chemistry between them, Ray has some great chase scenes towards the end reminiscent of slasher films of their reigning era the 1980s. I LOVED Donna, played by Leah Wiseman, she had the most fantastic facial expressions whether it be disdain, sadness or fury (wait for THAT scene) and I hope to see more of her work in the future. Both Nicholas Sweezer and Elizabeth Mears play the teens you love to hate brilliantly and both individually have some great scenes...both meet Betsy in completely different circumstances and their interactions are just perfect. Jason Vail plays the haunted Paul Donner to perfection and it was great to have a surviving character return to add a sense of continuity between both scenes. Jason also has some great material later on in the movie which he really sinks his teeth into.

Tommy has written in some great gore gags into the movie, one of which made me squirm for a while after, its also hilarious but that doesn't take away from the eeeek factor of it! There are some nicely done scenes of murder and mayhem and you wont need to a fan of the original to appreciate them.

A perfect sequel to a cult classic, Dorchesters Revenge: the Return of Crinoline Head has it all; laughs, scares, blood, guts and some very very funny drag queens. Viewers with a good sense of humor and an interest in quirky slasher movies will LOVE this. Check out the official Horsecreek Productions website and also the official Dorchesters Revenge Facebook page to find out more.

Release: DVD and VHS available HERE   (Enter 'Hacked' for a $2 discount from your purchase - due to the kindness of David Long!) 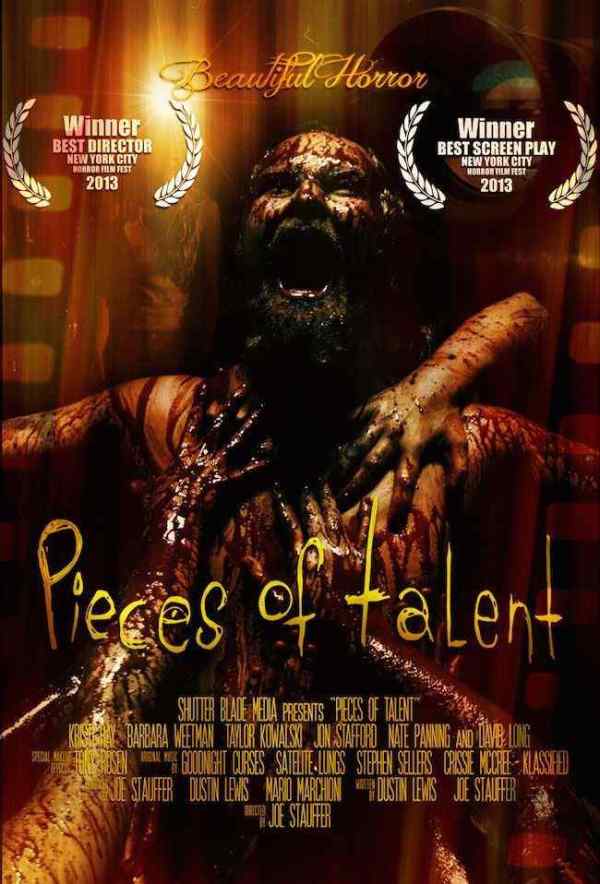 From the Official Pieces of Talent webiste:

Set in the small coastal town of Bright Leaf, North Carolina, “Pieces of Talent” centers around Charlotte, a disillusioned aspiring actress working a night job as a cocktail waitress in order to make ends meet. Charlotte catches a break when seemingly chance circumstances put her in contact with a local filmmaker, David Long. David and Charlotte form a quick friendship that leads to Charlotte landing the starring role in David’s newest project. David quickly becomes obsessed with Charlotte and begins building his bloody masterpiece. He films each encounter with the ultimate goal of filming Charlotte as his final installment. David is a happily obsessed individual willing to do whatever it takes to make “true art”. He utilizes his charm and skills to make something dark and deranged seem utterly beautiful and loving.
In a sense Pieces of Talent is a toughie to review - not because I did not enjoy it, but because I DID enjoy it. To those interested in owning a copy I highly recommend it, but would warn there are several disturbing scenes - these scenes are incredibly important in order to support the plot but I thought I would warn you anyway!

Anyway with the dull stuff out of the way, I have to applaud the director and writers of Pieces of Talent for creating a visually excellent, brilliantly written and acted, sometimes grueling piece of horror cinema with enough human drama to make you feel something for those involved. Don't expect any thinly drawn characters of whose deaths you are just foaming at the mouth for. This film gives us characters we either care about or dislike to the point you expect them to die but you are still not sure they deserve the fate that is likely coming their way. That's where David Long comes in.

David Long playing, well, David Long is a complete revelation in this film. No matter what he is doing good, bad, kind or outright atrocious, its incredibly hard to avert your eyes - a real raw acting talent which is carried to a high standard all the way to the movies grim conclusion.

Likewise Kristi Ray as Charlotte provides an amazingly natural performance and there are points in the film where I wanted to reach out and hug her, she is basically beaten down for having the audacity to have ambitions, ambitions which eventually guide her into the twisted realm of David Long. Charlotte's mother played by Barbara Weetman, one of the guilty parties for driving Charlotte's sense of worth deep into the ground is another fantastic performance. Unless Barbara was actually drunk off her face on set the whole time, I have to say, man can this lady play the bitter alcoholic to a fine art - a truly believable performance.

There are a number of grisly scenes in this movie, all brilliantly done and practical with a few being quite disturbing. The first two victims fates definitely had me wanting to cover my eyes and this was less about the graphic nature and more about Davids cheerful disposition throughout - watch and you will catch my drift.

Support indie cinema and grab of a copy of this film, Joe Stauffer is clearly a director to watch based on this film which has a wonderfully dreamy feel in among the expertly written and directed scenes of horror. I also predict bright futures for many others involved in the film, particularly the actors mentioned.