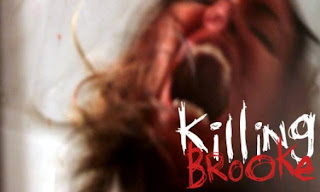 Many thanks to Director and Writer Dave Zagorski for letting me check out Mad Z Productions first feature length film Killing Brooke.

The film centres around titular character Brooke Porter (Alex Fandel) who finds herself in a horrifying situation just one day after marrying her partner Chloe (Dina Baker). I have to say that getting married seemed to me like a slightly odd choice for the character of Brooke. She is portrayed as a really rather free spirited girl particularly in comparison to her more reserved girlfriend. Brooke's fun seeking nature is further displayed following her and Chloe's chance encounter on their wedding night with Vance, a charming drifter who sleeps with young ladies only to brutally slay them after. Too much drink leads Brooke and Chloe to a inebriated threesome which they will both live to regret (or not) in equal measure.

I was really pleased with what happened next in this movie. The aforementioned plot could have been the long and short of it all. However Vance showing his true colours to Brooke and Chloe is only the start of a blood soaked nightmare as an escape attempt leads Brooke to the home of the Spade family. It is here, in this unassuming looking home, that the real nightmare begins.

In terms of characters I must highlight Kt Baldassaro. She really unnerved me as the initially sweet acting but 100% ill meaning lunatic, 'Darla Spade'. There is just something, and it might be wrong to say, about a young female being so utterly cruel and unsympathetic. That's good work to Kt though as she played her character extremely well. Alex Fandel and Colin Allen both played their opposing characters Brooke and Vance brilliantly too. I kind of felt like I disliked Brooke at first, she seemed quite flaky and non committed to the..well commitment she just made - but then I realised she is just young and human with flaws like anyone else. Her 'relationship' with Vance is horribly complex and the forcing of this pair together makes for a disturbing new twist on this type of horror movie and goes to places I for one haven't witnessed before. The only character I really couldn't take to at all was Chloe - she was the sensible one in her and Brooke's relationship which was good but she was very annoying with it. I think she was supposed to be though....

All in all Killing Brooke was a good watch. It is very professionally shot, the audio is clear and it is well edited. The plot was also interesting and as mentioned did put a rather clever new spin on the survival horror genre and this is something Mad Z Productions promise in their promotion of the movie. There is some ineffective acting from some of the supporting characters but this was also generally good particularly by the central players.

You can find out more about Mad Z Productions and Killing Brooke here so please do check it out and catch this film when you can!
Posted by Mark B at 09:23