Hearing a lot of great stuff about Richard Powells short film Worm you can imagine how pleased I was to be able to check it out and review it. I have been enjoying a number of short horror films recently and have been really impressed at the skill involved in making an entertaining horror film within the confines of 20-30 minutes.

Worm being no exception, gets it right from the get go by immediately grabbing the viewers attention. As soon as I heard the first hateful thought brewing inside the main characters mind I was hooked and was excited to see it through to the end.

Richard Powell tells us the story of Geoffrey Dodd (Robert Nolan) a high school teacher who is clearly dissatisfied with his lot. Sweet talking but very ill meaning, audiences are allowed the disturbing privilege of hearing what Geoffrey really thinks about those around him. Is he actually going insane? Is he just a bad man deep down? I wasn't 100% sure but that only serves to make Worm more intriguing. The short escalates with Geoffrey's thoughts becoming ever more deranged and crazed. Everyone in Geoffrey's class and the rest of the faculty are subject to musings of death, injury and disturbingly in one case; lust.

The ending certainly leaves you thinking. Just what might happen the next day at school? Those expecting a gory finale might be disappointed but truthfully Worm really didn't need one. This is  horror of the thought provoking and psychological kind - and it's done exceptionally well. 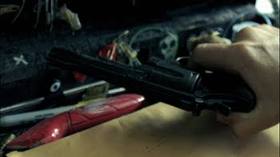 A brilliantly shot and very well acted (Robert Nolan is spot on as the down beaten and potentially dangerous Geoffrey Dodd) 20 minute film, Worm deserves your attention. Check it out if you get the chance and keep your eyes out for another short from Richard; FAMILIAR which is already getting a great buzz! 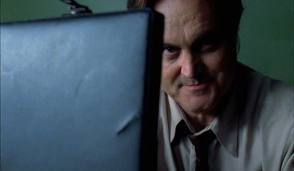