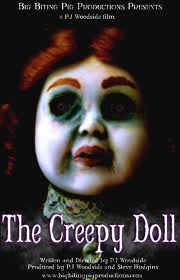 
Big Biting Pig Productions continue their impressive input into the independent horror genre with this chilling tale of jealousy, obsession and bloody revenge.

Western Kentucky based Big Biting Pig Productions have pleased this indie horror hound since I bought three of their previous movies from them in one fell swoop. These were of a variety of horror movie sub genres, from slasher to monster flick to Zombie movie.  Now having watched all of their movies aside from the unavailable 3rd Floor, I can say there is one thing unequivocally consistent in every movie I have seen from these guys and that’s the writing. Smart, intelligent or clever don’t quite do the team (comprising of actor/writer/producer/directors Steve Hudgins and PJ Woodside) any justice. But they are all those things – there are always surprises along the way from a BBP movie and you are guaranteed a mystery filled (usually non linear) thrill ride throughout the entire running time. You may say ‘even in a Zombie movie?’....well yes, even more so than ever in a Zombie movie!

Switching up roles from previous output, Hell Is Full ( the new best zombie movie you need to check out )director Steve Hudgins takes a step back from writing and directing while PJ Woodside takes the reign for new movie The Creepy Doll. A slow burning shocker with a genuinely unsettling lead performance from Kristine Renee Farley, The Creepy Doll gently teases, until its shock filled denouement. Kate and Jason are newlyweds, returning to Jason’s hometown, with the intent of raising their unborn child. It’s only after Kate’s childhood doll collection is shipped over that things begin to get...well...creepy.  One doll in particular, in case you haven’t realised, the titular one, is the creepiest of them all and it very much appears to have a disturbing hold over Kate. This isn’t Chucky territory though, so anyone expecting the creepy doll to attack characters in a murderous rage may be disappointed. Instead you have to use your imagination as to how real Kate’s perceptions may or may not be. Being a horror film you will probably expect the blood to eventually flow. And boy does it. Not, mind you, in a gratuitous way, but in a scary, realistic and emotionally charged way, making you stand to attention. This can be largely put down to the great writing and the actor’s interpretation of the script. There are great performances all round here, particularly from the aforementioned Kristine Renee Farley, Jessica Cook as the scheming ex and Cindy Maples as Jason’s bewildered mother.

To find out more about the movie and to purchase this and other BBP DVDs please check out their cool website here: http://www.bigbitingpigproductions.com/. All releases are well worth your time and money and I intend to cover the others VERY soon.
Posted by Mark B at 12:06