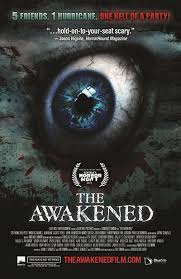 Thanks so much to Lou Simon for asking me to check out her new indie horror The Awakened for review. Lou co wrote and directed the film which I would like to highly recommend to fans of creepy ghost stories..

The plot of the film involves five young people hold up in a house to wait out a hurricane. As the night progresses and the alcohol flows, the group mess with the spirit world by performing a supposedly innocent ritual. Sadly for these people, the hurricane is the very least of their worries as they have inadvertently allowed something bad into the house. There is no escape, no phone signal and no hope as the spirit from an ungodly place sets about attacking the friends one by one.

The thing I liked most about this movie is that is wasnt gratuitous. Because really, it did not need to be. The characters are all well defined and you are given long enough to get to know them and care about most of their fates. Therefore I feel an out and out gore fest may have cheapened things in this particular case and when bad things do happen to the characters (and oh boy they do!) it comes off as far more dramatic.

In terms of horror there are some great jump scares and several well done creepy scenes. The scene in which the first character is attacked is very well done as you see their shadow slowly joined by the  shadow of another, followed by a very nasty sound effect.  As the film barrells towards its climax you may just find yourself on edge to find out who, if anyone, might survive the night.

I really liked the idea behind the film in regards to the hurricane. Sometimes horror films can be a bit frustrating in that people find themselves in a rather dire situation but you cant help but feel there were several possible opportunities to get away/seek help. In the case of The Awakened, these people are well and truly trapped, and there is a believable reason why they cannot get any help.

The production values on the film are also top notch. Its filmed exceptionally well and the direction helps to rachet up the tension when you are starting to feel like something bad might happen.

I think all key players did a grear job in this movie. A real refreshing change to have all of the principal cast delivering good performances without several more sub par ones. I have to give props to Stephanie Pitts who was a great lead in the role of  'Gina' who is required to show quite the range of moods and emotions throughout the films running time.

I recommend this film  indeed - those who like a creepy, jumpy ghost story with some light gore will really enjoy this film I think. Its suspenseful, has some good scares and looks fantastic! Check out the official Facebook page HERE!.
Posted by Mark B at 12:08