CINDY MAPLES GETS HACKED IN THE HEAD - AN INTERVIEW

Fast becoming an indie horror favourite, I was very lucky to grab a few words with the lovely Cindy Maples. Cindy's growing popularity is pretty much thanks to her obvious versatility as an actress, playing absolute polar opposites of previous characters in all of her films.  If you are familiar with the films of Big Biting Pig Productions (and you should be) then these are a case in point if you consider Cindy's role in Hell is Full and then go on and watch her in The Creepy Doll! Read on for our great interview and be sure to get yourself familiar with Cindy's work - its fair to say there will be MUCH more to come from this lady!

Hacked in the Head: Hey Cindy thank you so much for taking the time to talk to me! You seem to be becoming ever more popular for your work in indie horror which is amazing as I have enjoyed your characters in all of the films I have seen you in. How do you feel about the recognition your work is getting?

Cindy Maples: Greetings from across the pond and THANK YOU so much for asking me! I’m always thrilled when either my performance or a film I’m in is recognized. Indie film is a tough business, because there are so many of us out there doing it, so to be singled out in such a large crowd is always very humbling and inspiring.

Hacked in the Head: To expand on your acting roles I would love to hear more about your experiences with Big Biting Pig Productions. What was your favourite role for BBP and why?

Cindy Maples:I’ve been lucky enough to work on three BBPP movies, WIDOW, HELL IS FULL and THE CREEPY DOLL. Vivian Potts from WIDOW will always be my favorite role from those three movies. Vivian was such a flawed and rich character that forced me to find this darkness inside that I didn’t even know existed. It was a wonderfully wicked role that I think only comes along once in a lifetime. I had done so much research for that role, that by the time it was over I felt that I was starting to exhibit some of her psychosis. Of course that could have just been exhaustion. Anytime I have to challenge myself like that, I find it much more rewarding and my performance is always enhanced because of it. It’s also special because it was my first movie role, until that point I had only done theatre.

One of the more interesting stories from WIDOW happened on the last night of principle photography when I had to drive home at 2:00 in morning covered in blood. I remember being so tired and praying during the entire trip that I wouldn’t get pulled over. I wasn’t sure that a cop would understand that I wasn’t really dying or that I didn’t just kill someone. Needless to say I learned to always bring a change of clothes with me. Also, I really enjoyed playing the role of Olivia in HELL IS FULL, I’m mean who doesn’t love vomiting blood and turning into a flesh eating zombie. 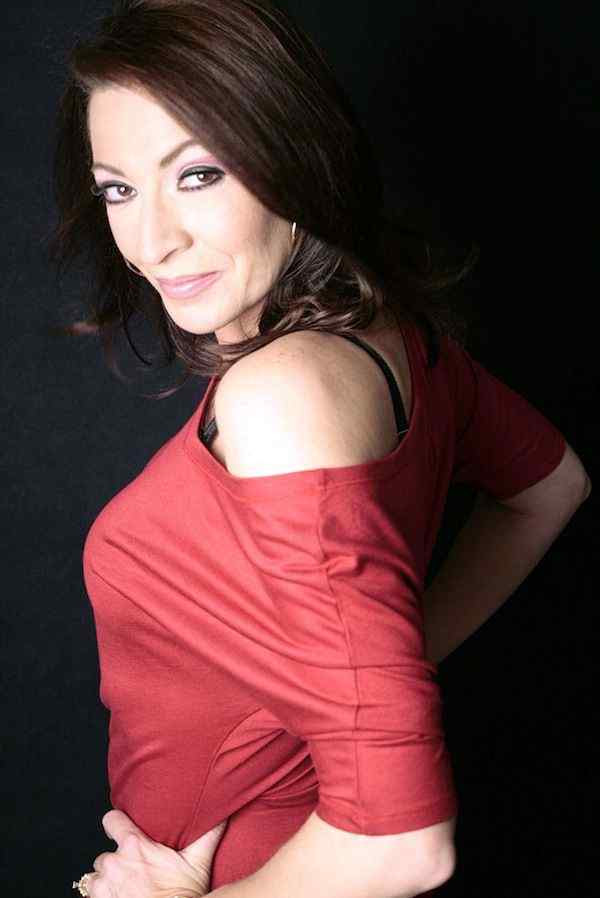 Hacked in the Head: I loved Vivian Potts also, what a complex character, and I have a real soft spot for your role of Emily Carraway in The Creepy Doll.

I am also a HUGE fan of your short but fantastic role in Jakob Bilinski's short film Bloody Hooker Bang Bang. I wish you could have been around for the blood soaked finale. Do you think there could be bigger plans for this character? I among, many others have harassed poor Jacob to make a feature length spin off from the short ;)

Cindy Maples:I would have LOVED to been around for the blood-soaked finale! Unfortunately, my character just starts the chaos and then sits back and waits. I’m really proud of this short film and all the attention it’s getting. Hopefully someday everyone who has asked for more will get a chance to at least see the extended version. I’ve heard some rumors of more coming from the Hook Squad and that Momma Crowe would make a return, but at this time I can neither confirm nor deny those rumors.

I remember the e-mail from Jake about this film. He simply said, “Hey, I’m doing this grindhouse short and have a part that I would like you to do.” My response was something like “you had me at grindhouse.” Then he sends me the script and I discover that I get to play a bat-shit crazy, head of an underworld crime family and I think I smiled for 3 days straight. I adore Jake and his work is amazing. So I think it’s safe to say that anytime he asked me to do something, I would move heaven and earth to be there.

Hacked in the Head: Awesome, I will make sure Jake reads this :) Momma Crowe was a fantastic character and lets face it - she causes all the bad stuff to go down so you certainly make a huge impact in that film!

I also understand you are making your foray into directing? Tell me more!

Cindy Maples: Even though the cast and crew would say that I was doing some directing, I am actually trying my hand at producing. As an actress I sometimes have scripts sent to me with the hopes that someday the movie/short film will be made. One of these scripts caught my eye and I decided to go for it. The short film is called The Telemarketer and it is based on the short story of the same name written by John Cosper. It is currently in post-production and we are looking to send it out to local film festivals within the next month. Then it will go live on-line after that. I have never attempted anything like this before but I have been around enough to know that I needed a director. So I contacted my friend Jon Higgins of Communindie Films and asked if he would be interested. To my delight he said yes and we started the wheels moving on the project. I secured locations, made props and was able to get a great cast assembled. It’s a fun little comedy that looks at a possible scenario of telemarketing in the not too distant future.

Hacked in the Head: This all sounds amazing! I assumed you were 'taking the helm' so to speak, directing wise after sending me a recent short to check out - nonetheless you are certainly branching out from acting and that's brilliant! :)

How do you feel about the horror genre in general? Are you a fan or has your involvement in the genre just kind of 'come about’? If you are...I would love to know some of your favourites?

Cindy Maples: I’m a huge fan of the Horror genre! Lately I have been involved in other types of film and I find myself really missing the blood and gore of horror. Some of my first memories of watching movies are associated with horror. The first film I really remember seeing is Dracula’s Daughter and that I had to sleep with the blankets up over my head so that I wouldn’t get bitten. I enjoy a good drama or comedy, but there is just nothing like a good scary movie to leave an impact on you after you walk out of the theatre. My favorite will always be The Exorcist, but I also feel myself drawn to the psychological thrillers like The Others and The Six Sense. I like a movie that when it ends you have to immediately see it again, because everything you thought you knew was blown out of the water in the last few minutes.

Hacked in the Head: What would your dream acting role be Cindy? And on the directing side what would be your dream movie to make?

Cindy Maples: I've been so lucky to have already played such great characters; it’s hard for me to say what my dream role would be. I know I would love more characters like Vivian and Momma Crowe where I can just go insane and explore the challenges of the dark side. As far as directing, I currently have no desire to it, but if I did I would definitely be looking for a psychological thriller. I would love the opportunity either through acting, producing or directing to totally mess with people’s minds.

Hacked in the Head: What else do you enjoy doing in your spare time when you are not being transformed into a zombiefied housewife or sending your psychotic offspring out to kill hookers?

Cindy Maples: I'm an avid reader and you can find me curled up with my Nook every night before I go to bed, usually with my Doberman Raven lying beside me. My husband and I purchased an old historic house in the town we live in and we spend a lot of time on that, as well as trying to prove or disprove that we have ghosts living with us. I stay as involved as I can in the local film community either by going to meetings, premieres or film festivals. I consider myself to be as much a fan of indie film as I am a participant in it.

Hacked in the Head: Finally Cindy do you have anything else to share with readers. And I mean anything? ;)

Cindy Maples:First, I would like to say a big THANKS to you Mark and to all the amazing bloggers out there that support Indie film! All of you help us spread the word either by writing reviews, interviews or just talking about our projects. That kind of support is invaluable. Second I would tell your readers to support indie film or get involved in it, you will never regret it! Third, if you’re not completely bored with me yet, check out all my other projects on IMDB http://www.imdb.com/name/nm3603974 and while you’re there LIKE me.

Following are links to find some of my projects:

WIDOW, HELL IS FULL and THE CREEPY DOLL http://www.bigbitingpigproductions.com/OurMovies.html

Hacked in the Head: Thank you Cindy so much and best of luck with all of your future and upcoming projects!