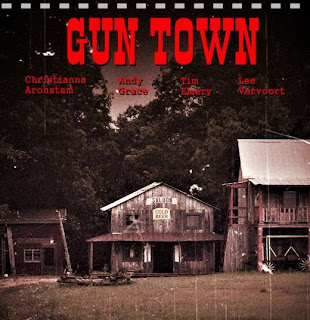 Gun Town - a place where the wild west meets grisly horror - is the directorial debut of Lee Vervoort.

Gun Town, an old abandoned Western themed tourist attraction has a history coated in blood. It seems back when business was booming, owner Frank Bailey Snr had some severe anger issues. After a particularly bad day at the office he loses the plot, causing death and destruction and thus turning his 'Gun Town' into a true horror show. Sadly for a group of five friends who happen upon the apparently deserted attraction, Frank was released from the nut farm after serving his lengthy sentence. Now he and his equally maniacal family lie in wait for them and Gun Town is truly back in business. Only the toughest of the group will make it out intact as the insanity festering within the Bailey clan comes full circle - as stated on the DVD, it really is 'draw or die'!

I enjoyed the characters in this movie. Particularly the goofy Jerry (Andrew Thornhill) and fun and rather incredulous Tracy (Lauren Hoffman). As for the villains, Frank Snr (played ominously by director Lee Vervoort) is creepy as hell - his face hidden by a unsettlingly blank mask. His wife, Mrs Bailey (Morgan Graham) is also nicely deranged and murderous and is played very well. I also really liked the touch with the eerie looking mannequins - extremely reminiscent of the oddball yet chilling Tourist Trap. There is a really notable scene where the character of Tracy is frightened by what she thinks is a mannequin and makes a jokey comment at it - viewers are soon shown however that it wasn't as lifeless as it first appeared. In fact this is the creepy scene which kicks the rest of the movies action off until the very end so I thought that it was particularly effective.

The movie is exceptionally well shot and easily belies its small budget. There are also zero sound issues which is always great to see in an indie.

Check out the site soon for an interview with Lee Vervoort who not only wrote and directed Gun Town but also produced, acted in and did the stunts for it! Please grab a copy of the film as well, it's a great little watch with a nice original setting and some truly scary characters!